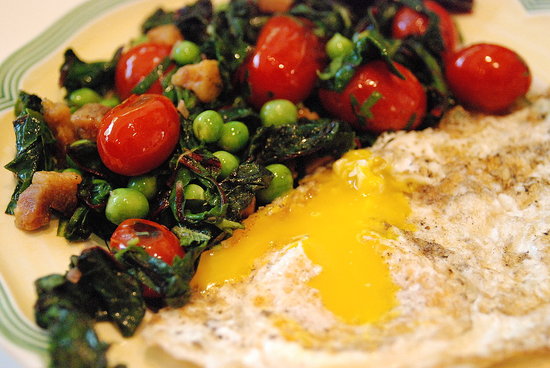 I don’t each much pork, or meat for that matter, but I have to admit that there is nothing – nothing! – like the power of a bit of cured pork to completely transform a dish.  This is not a culinary secret, of course, but perhaps these days it isn’t said often enough.  And it should be, because if you’re cooking on a budget, or even cooking for health, with a very small input you can reap a big, big flavor payoff.  I’m thinking in particular of bacon, pancetta, and prosciutto.  Like, start a whatever-is-in-

the-cooler vegetable soup with a couple of slices of chopped bacon, saute until crisp, stir in the aromatics, then the substance and broth, simmer until tender and voila, you’ve elevated veggies to something rather sublime. Finish with a grating of good Parmesan and a grind of freshly ground black pepper, perhaps a toasted crouton, and you will be both charmed and full.  (And how about that asparagus soup I had at Trattoria Tosca last week?  All about the pancetta…)

I know the fabulousness of crispy prosciutto, aka God’s Gift to Salads, from a little cooking project I did with Andrew Zimmern a few years back.  We made up a chopped salad for a local restaurant filled with all the good stuff – crisp greens, avocado, sweet onion, crumbled blue cheese, chicken breast, sweet corn, tomato, cucumber, (freshly flash-fried) potato crunchies, and yes, crispy prosciutto.  This via Andrew: to make prosciutto, lay paper-thin slices of prosciutto on a baking sheet (do not overlap).  Bake at 375 degrees F until crisp and browned, about 7-8 minutes.  Let cool, crumble.  Paper thin and shatteringly crisp, it delivers porky saltiness to a salad like no other bacon could – for much less fat.  Must.  Try. 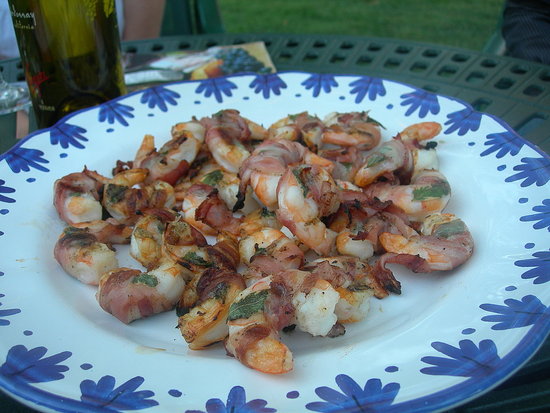 And then, there’s pancetta, aka Italian bacon.  Buy it paper-thin, wrap it around shrimps and fresh sage, and grill until crisp for Stu The Wine Genius’ famous appetizer (or, saute the whole dish for my adaptation, Shrimp Saltimbocca).  Or for the holidays, or anytime

you’re craving brussels sprouts, try the Brussels with Pancetta and Dried Cranberries I made this past holiday and is now going to be my new Thanksgiving standard.

And then, and then, there’s the dish I made for dinner tonight, which I’ll call Springtime Fava Bean Salad with Poached Egg because it’s the recipe I loosely followed (from the cookbook I mentioned last week, which I now possess – gorgeous and incredible, Seven Fires: Grilling the Argentine Way by Francis Mallmann; pic above).  I say loosely because I didn’t include favas (John doesn’t like them) and because I didn’t poach the eggs (I just sauteed them over-easy right before we ate).  Also, I filled out the veggies with sauteed swiss chard (I knew it would be delectable with the pancetta, tomatoes, and freshly shelled peas), I used no extra oil (and drained off most of the pancetta drippings), and I skipped the toast.  Not what I would usually recommend – to change a recipe before ever making it.  But in this case, it was a do-with-what-I-had, as well as a keep-it-healthy sort of effort, and the result was truly sublime. The star was the three ounces of thick-cut, cubed pancetta, mmm hmmm. Recipe (and my adaptations, if you’re interested) here.