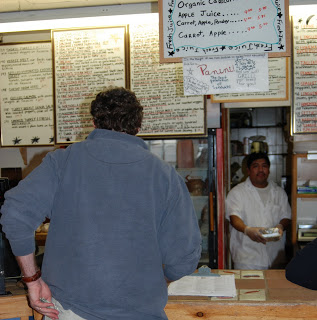 Despite persistent clouds and rain (boo), we’ve been able to spend a nice amount of time outside. On Friday, John and I fit in a stroll through lovely Sag Harbor, stopping for focaccia sandwiches at one of our favorite little cafes, Espresso. You only order one of these babies for two or more people – they’re huge, half a loaf of their famous focaccia, split wide and stuffed with all manner of homemade, scrumptious fillings. We kept it simple with turkey, fresh mozzarella, arugula, and onions, topped with their signature vinaigrette, and it was delicious. 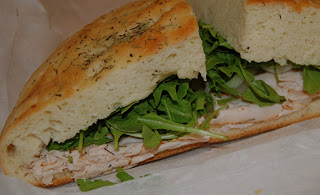 afternoon and treated us to dinner at the Old Stove Pub. Set way back from the road, the Pub is in an old farmhouse, cozy, very casual, and perfectly candlelit for a rainy September’s eve. Steaks are their specialty, so steaks we had – The Broadway, baby, a sizzling slab of ribeye, dabbed with herb butter and served steakhouse-style with platters of sides to share. Their version of spinach is sauteed with lots of garlic (I actually could have had just that for din, so yummy) and the potatoes are cut skin-on, fried, and showered with fresh herbs and coarse salt. The

Johns somehow finished with “cold fudge” sundaes for dessert; I couldn’t do it, totally ran out of steam. But for them, steak and ice cream, NICE!

Yesterday John and I took a quiet bike ride through the village of East Hampton – leafy and serene despite the overcast sky. We did some serious house-gawking, I mean damn; major bonus to be up on bikes, you know, the better to spy over those pesky fences and hedges.

We spent the afternoon with John’s bro Tom (and pup Spice!), checking out his new digs in Bridgehampton and putting together a lunch of tasty leftovers. Despite the 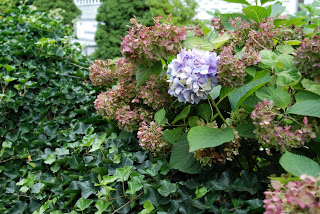 sunless sky, we hit the beach for naps, chat, and reading. After showers, and cocktails here at the house, we five had an amazing dinner at 1770 House in East Hampton. Tucked into another charming old house-turned-inn (not so uncommon in a town first settled in 1648), we settled into a corner table for some serious eats. I opened with a chilled puree of sweet corn soup, geniusly garnished with a hot, crispy piece of pork belly, and just about swooned. Oink friggin oink, yum. Pretty much full at that point, I dug anyhow into my second course, a crispy-rosy duck breast, sliced and fanned prettily over a 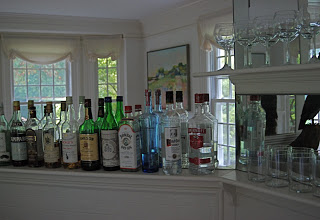 pile of pillowy, homemade spaetzle, drizzled with a rich duck-wine-fig sauce to pull it all together. I finished with a piece of cheese and a glass of muscat. Uff. Dah. My bed felt goooood after that meal.

Today, we’re awaiting the arrival of our Minnesota-friends Jon & Amy Brown, out ’round these parts to celebrate their anniversary. Our original plan was to

arrange some sort of dinner on the beach, as the sun set, but that’s looking highly unlikely given the weather. Backup plan – The American Hotel in Sag Harbor, uber-romantic and anniversary worthy. It’s not the beach, but is much easier on the hair, and as you know, that’s OK by me.

Moderate it: alright, we’re eating out every night, which is never a formula for moderation. The best I can do is really focus on when I feel even slightly full…and then push what’s left of my food off on the men at the table. Seriously, nothing gets unnecessary food out of the way faster. Thank goodness for men.