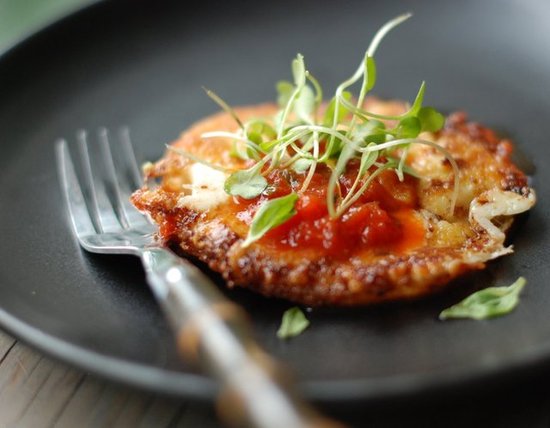 So I had fried cheese for both breakfast and dinner today.

I am ridiculously obsessed with the stuff right now, to such a degree that I kind of embarrassed myself a couple of weeks ago raving about the gluten-free fried cheese curds at Red Stag in NE Minneapolis to Ryan Petz of Fulton Beer. When we ended our conversation with plans for a group brunch, he wryly suggested that maybe we’d best head to Red Stag to assuage my fried cheese craving.

So that’s exactly what we did! And the crispy, salty little treats were so good that I ordered a few more rounds while at Red Stag again this past week with a group of the girls.

Apparently my years at the University of Wisconsin taught me well that There is Never Enough Fried Cheese. And that Beer is Food, although that’s a different post.

But since I can’t very well go running off to Red Stag every time I have a craving for fried cheese, and because tasty cheese curds aren’t completely easy to obtain, I created the version pictured with slices of fresh mozzarella coated with egg and almond flour. The trick for cheese contained within – not exploding out of – a golden crust is to freeze it for a bit before frying.

Serve the melty, golden loveliness with marinara sauce and lots of basil for an almost-summer treat.

Put the uncovered plate of cheese in the freezer for 30 minutes.

Add 1/4-inch deep olive oil to a medium skillet and heat over medium-high heat. When the oil is hot, fry the cold cheese slices a couple at a time, until golden brown on both sides. Transfer slices to a paper towel-lined plate and fry the rest of the cheese. Serve cheese hot with warm marinara sauce & fresh basil.