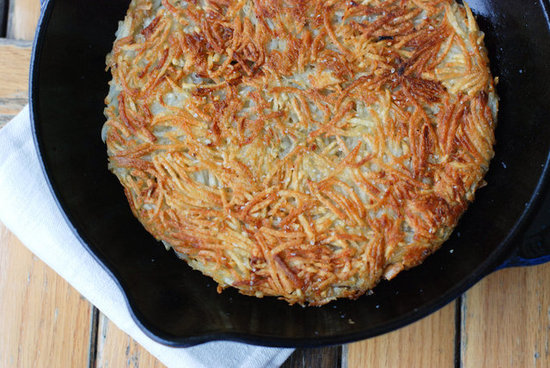 As I put together this post, I took a quick little poll on Facebook, asking for my friends’ top three favorite foods. I was assuming that crispy potatoes in their various forms would solidly make the list. I can’t be alone in my obsession with salty french fries, roasted potatoes, or potato chips…right?

Thanks to my Grandma Meyer, I set off for college with the ability to deliver a panful of these golden, buttery beauties to starving, post-party roommates. And boys. Perhaps not what she intended when she taught me to make them, but really, these are cheap eats of the highest order, face-stuffable on their own, or even rather elegant topped with sauteed vegetables and a poached egg.

The trick for crispy potatoes of any variety is an adequate amount of hot fat. Once you accept that, and don’t stress out about it, because you’re not going to eat them every day, you’re all good. I most often use a combination of high heat vegetable oil (safflower or sunflower) with butter. But if I have beef fat, or chicken fat, or bacon drippings, or duck fat, you can bet it goes into the pan. The hash browns in the photo are kissed by beef fat, because I’d just made stock with beef short ribs, and saved the fat I skimmed from the stock. (Always do that! Wrap it up and freeze it and there it is, a little present to yourself when you’re craving crispy potatoes.)

A nicely cured cast iron skillet is excellent for putting a good crust on just about anything, but a nonstick pan works well too.

Add oil and butter to a large cast iron or non-stick skillet.

Grate potatoes on the large holes of a box grater, or in a food processor with a grater attachment. As you finish grating, heat the pan over medium high heat until oil is hot. Working quickly, add the potatoes to the pan. Turn heat down a bit to medium/medium high (you want the pan hot enough to brown the potatoes, but without burning them). Press down on the potatoes with a spatula a few times while they brown so they form a compact cake. Do not flip them before they’ve formed a nicely crusty surface! Watch the edges of the potatoes to look for browning; it’s fine to lift up an edge of the potatoes to check, but do your best to not mess with them too much.

Slide the hash brown cake onto a cutting board, salt generously, slice into wedges, and serve immediately.

PS If you, like I, love Taco John’s potato oles, but can’t eat gluten (they’re coated in flour before frying), keep in mind that it’s easy to whip up your own seasoned salt to sprinkle over hash browns. Combine sea salt, good chile powder, cumin, and garlic powder to taste in a coffee grinder, whir briefly to create a finely ground seasoning.