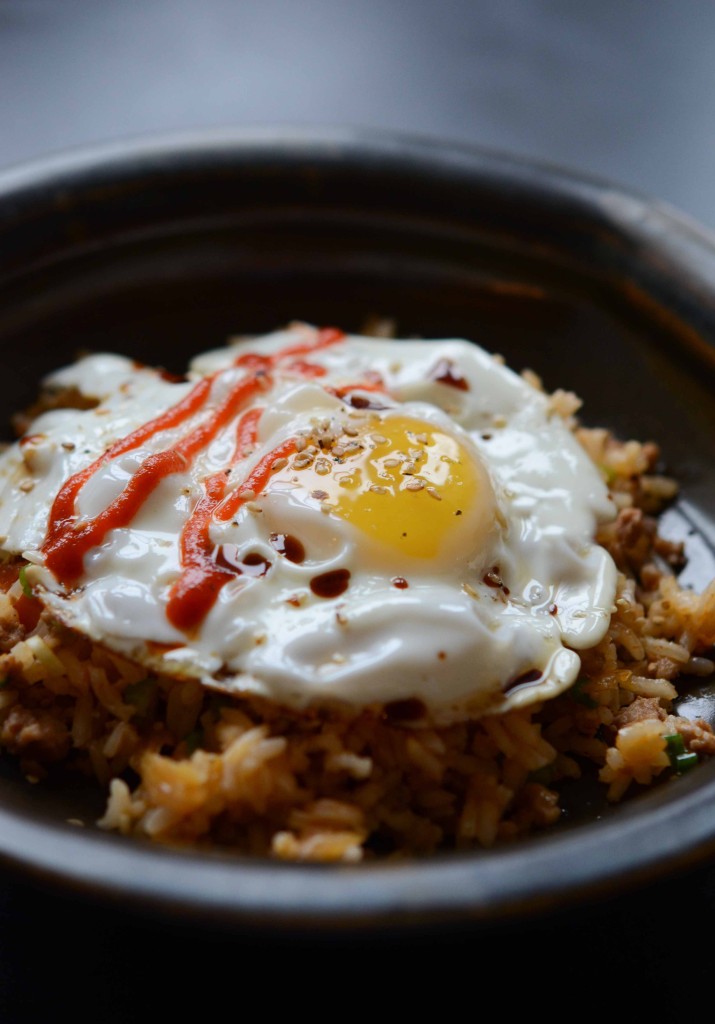 I first posted this dish before I embarked on the adventure of the autoimmune protocol (AIP), an elimination diet for healing and uncovering food sensitivities that eliminates most of the elements of this dish: eggs, nightshades (including chiles), seeds (sesame), soy (tamari), and grains (rice).

I’m happy to report that I can occasionally enjoy all of those foods again, after a year and a half of strict AIP and another year and a half of mostly AIP and doing my best to heal my gut, including a small bacteria intestinal overgrowth (SIBO) protocol, which helped me a LOT. Am I 100% healthy? I’d say 90%, which is good enough most days, and on the days it’s not, I’m careful to rest and recover. (By the way, if you struggle with SIBO, I highly recommend Dr. Michael Ruscio’s podcast. I learn so much every time I listen. Just this week I gleaned several new tips, check it out. He has a new book coming out on fiber and I’m really looking forward to it.)

I don’t want it to be true, but I fall into the fragile flower category more often than I’d like, and I’m slowly growing to accept that that’s who I am.

Things that take me down:

not getting enough sleep
stress (see above)
not exercising daily (movement is medicine, inactivity is toxic)
too much time indoors (fresh air & sunlight are also medicine)
too much coffee
too many non-AIP foods at a time (in particular: chocolate, eggs, nightshades, GF grains)
alcohol (which is why I rarely drink anymore)
too much fermentable fiber
too many high histamine foods at a time (kombucha, leftovers, fish, tea, kraut, kimchi)

The good news is that if I indulge occasionally, I’m totally fine. I seem to do particularly well with white rice, dairy, and potatoes, even though I keep them to a minimum because I feel best on a relatively low carbohydrate diet (75-100 grams/day). I’ve found that if I eat carbs for breakfast – even relatively low sugar fruits like berries – I am MUCH hungrier throughout the day. I’ve tested my blood sugar after a breakfast that includes berries, to see if it causes a spike, and it doesn’t. I’ve concluded the sweet taste triggers a dopamine response that taps on my brain all day wanting more. I’ll make myself a grain-free waffle or crepe on the weekend, but otherwise I stick to protein, fat, and greens for breakfast.

I’m launching the Healing Green Broth 30-Day Challenge next week, sending out recipes to those who’ve signed up. You can sign up at any time and I’ll send you 4 emails, once each week, with a bone broth recipe and a couple of flavor variations to try during the week. It’s free, and fun, and speaking of savory breakfasts…it’s basically the PERFECT savory breakfast.

I’m working on meal plans too, based on all of my experiments, teaching, coaching, and years of recipe development. Of course the meals will be based on real food, easily prepared, with tons of fun flavor. They’ll include shopping lists and recipes as well as shopping, batch cooking, storage, and reheating instructions. I’ll be launching them in the next several weeks – if you sign up for the Healing Green Broth 30-Day Challenge, you’ll be on the mailing list.

So…lots of exciting things happening! I hope you’re enjoying some early spring weather and time outside.

Let me introduce you to your new late night (or morning after?) go-to dish. You can’t argue with the restorative powers of kimchi – spicy fermented vegetables – especially when tossed with rice, sesame oil, and spicy chili paste. Go for Korean gochujang because it’s incredible (spicy-sweet with just a hint of funky, in the best possible way), or reach for sriracha because you’re already addicted and stocked up. I add tamari, which is not traditional, but the mellow saltiness plays so nicely with tangy kimchi. This is fusion cooking the way it’s meant to be – fast, flavorful, and plucking all of your favorite notes, preferably straight from your fridge. 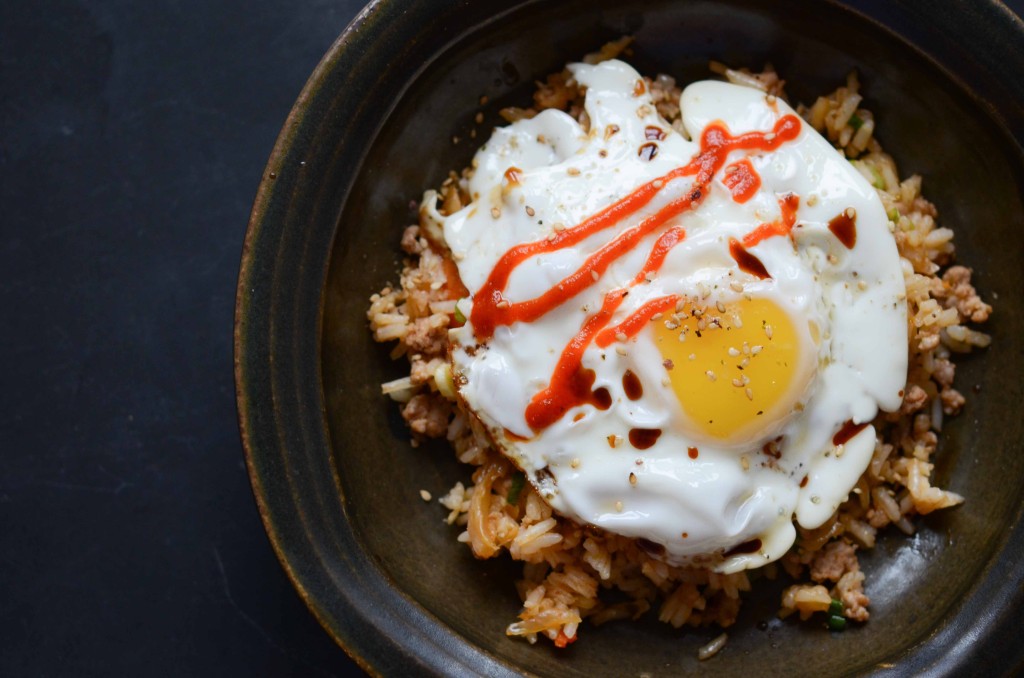 There are lots of options here – skip the pork and egg for a vegan dish. Skip just the pork for a vegetarian dish. It’s also not traditional, but if you skip the pork, coconut oil is a lovely addition, and so nourishing that I’m always trying to find tasty places to sneak it in.

I got the idea for this dish last week, while chatting with Brian Hoffman of Fulton Beer. The whole Fulton gang hosted a little gathering at their newly-leased, currently-under-construction production facility. Because I can’t actually drink their beer (gluten), I held a pint of the evening’s brew and smelled it, touched my lips to it, and basically tortured myself while chatting with Brian about all of the beautiful, spicy foods that would be marvelous with such a hoppy, fruity, fragrant beer. 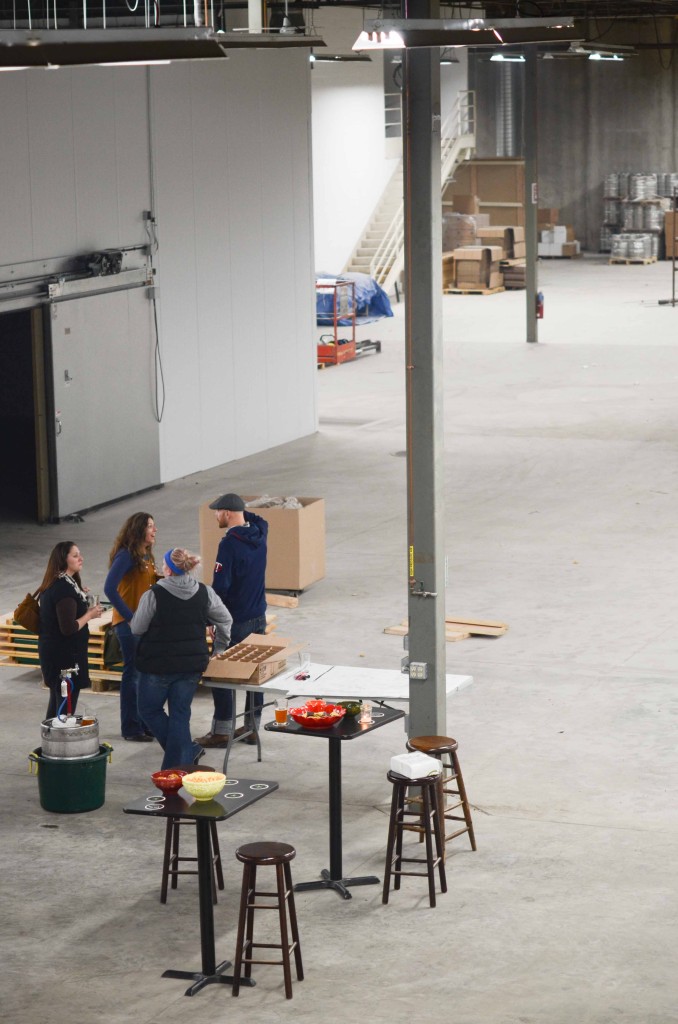 I distracted myself from self-pity by enjoying the crew’s signature hospitality. Every time we get together I’m impressed all over again by the founders’ collective friendship, talent, good humor, good taste, enthusiasm, and charm. What can I say? I adore them all, even though I can’t drink their beer. I was giddy on their behalf, scanning the abyss that is their new Northeast Minneapolis facility (for the moment called AFB, as in Another Fulton Brewery), imagining the shiny new tanks and thousands of bottles of deliciousness that will be leaving through the giant loading dock by late 2014, making its way into your belly but not mine. (Worry not, tasting room fans, the original North Loop Fulton brewery – aka 414 – remains in operation.)

That’s a long way of saying that Brian suggests, “With the fried rice, I would go with The Ringer or Batch 300. As we talked about, hoppy and spicy are a match made in heaven, and both of these beers deliver on that note. Both are also light enough in malt character and body to not overpower the kimchi, rice, or the egg.”

So there you go. Fulton forth and tell me how much you enjoyed it so I can live vicariously through you.

In a large skillet over medium heat, saute the ground pork, breaking it up with a spoon as it cooks, until just done (do not brown). Add the garlic and kimchi and saute for 1 minute. Add the rice, kimchi juice, and gochujang and saute for 3 minutes. Remove rice from heat and stir in the sesame oil, tamari, and scallions.

Serve rice hot topped with fried eggs. Garnish with sesame seeds and a drizzles of tamari, sesame oil, and gochujang (or sriracha) to taste.