Good start to the week. Got Nathan to school on time, stopped for gas and a car wash on the way home – in my pajamas no less, I am amazed by how crazy-daring I’ve gotten about running errands in my pajamas. With a winter coat over them, of course, but still, there are my pink clearly-pajama pants hanging out the bottom. And there I am, pumping gas, dropping Nathan at school, or running into the post office for stamps. I haven’t braved Byerly’s in pajamas yet, and probably never will. I would have to be seriously hungry or otherwise desperate to face 1) the employees who totally know me because I’m there every other day, 2) my former Park Nicollet colleagues who quite easily bop down to Byerly’s (secret back staircase) for lunch, snacks, postage, a newspaper, you name it, and 3) everyone else that I know because they all shop there, it’s pretty rare to go and not see someone familiar. I’ll go sweaty and makeup-less post-workout. But not in my pajamas. Yet.

As I mentioned yesterday, John does not love polenta (or he thinks he doesn’t), but after wishing I could have pork roast with polenta…I can’t get it out of my mind. So, sorry honey, we’re having polenta tonight. Crispy polenta, however, which everyone has to like – what is NOT to like???? Topped with (yet again, one can’t accuse me of not using my leftovers!) – pulled pieces of warm pork roast, and a pile of chopped tomato, raw onion, and arugula (yes, arugula again, its peppery, nutty taste is great with almost everything). I’ll think about a wine and write later what I come up with. For now, off to run errands (with street clothes on!) and continue working on the overly huge photo project I’ve created downstairs (hanging more than 50 pictures from our wedding on one wall – it will be spectacular when it’s done, but oh, what a pain in the ass). 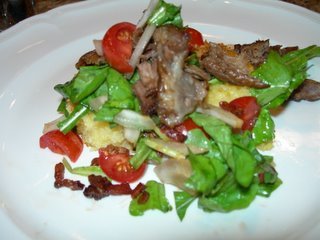 OK, dinner worked out fabulously AND John liked it. As he said, “You’re expanding my horizons.” In terms of the polenta, and he thinks, pork, even though he happily eats lots of bacon and ham. But as a Jew, he feels guilty and/or thinks he doesn’t like eating (uncured) pork. Somehow. It’s not a logic thing. He’s been a good sport about eating this pork roast, in three different iterations now. Time for me to freeze the rest (as I noted below, it was a 5 lb. roast!) So, I prepared the polenta this afternoon, smoothed it into a loaf pan, and let it cool at room temp, covered with plastic. When it was time for dinner, I sliced the polenta into 1/2″ slices for crisping. I tried two different methods – the first batch I just sauteed in oil. You know, don’t try that. Despite high heat on the preheat and during cooking, it soaked up too much oil to be considered moderate. Don’t get me wrong, it tasted fucking amazing, but John said, “Is this moderate?” And I had to admit, not so much, not with the amount of oil that soaked up. A better method, which I tested after we ate, was to pour a little oil in a bowl, and just brush each slice of polenta, both sides, with a smear of oil, then brown a bit in a hot skillet. Much better, less messy, and MUCH more moderate. And frankly, just as delicious. So do that. I topped with chopped arugula, thinly sliced sweet onion, and quartered Santa Sweet cherry tomatoes (good through the winter, when most other tomatoes are inedible). Dressed with – don’t panic, it’s not too fattening – a warm bacon/balsamic dressing. Super easy to do, just one slice (!) of diced bacon sauteed until crispy, add one teaspoon of good balsamic to the pan while hot. Then pour the warm dressing over chopped greens – mmmm, so good, but really not TOO naughty. I crisped pieces of pulled pork in the same skillet I’d made the bacon/balsamic dressing in (after a quick wipe with a paper towel), no additional fat needed. So in the end, hot, crispy polenta, topped with chopped greens, tomatoes, and onion tossed in a warm bacon/balsamic dressing, topped yet again with pieces of warm, crispy pork. TELL ME, how good does that sound? It was great. We poured a 2004 Volnay-Santenots Premier Cru with it, had a good smoky element that was a nice complement to all that pork-y yumminess. Let me also say, if you don’t have leftover roast pork lying around (ha), the crispy polenta with the salad on top would be FAB all on its own. I’ll post recipes in comments, below. Sleep tight.