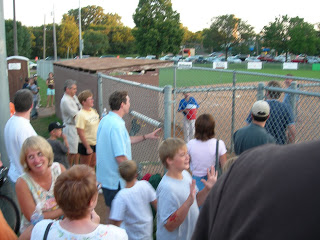 It’s over and…we won! The Laukka-Rempfer Floridians won the Little League Minors championship game tonight. Congratulations Tommy, Nick, TJ, Josh, Owen, Josh, Matthew, Isabel, Gabe, Mitchell, Neal, Taylor, Baye, and Nathan!Coaches Tommy, Tyler, Mike, and Brian!Team Mom Kristi and Stats-taker Jessica! A team effort in many ways, it really is. Obviously with the kids on the field, but behind the scenes it’s families volunteering their time to coach, organize, serve on the board, run the concessions, and sit at the games, rain or roasting shine. It’s very cool. And quite hot, as it were.

Ahhhh, an unbelievable win, what a season. I just about fell out of the stands at that last out, I really did. Wow. Somehow, some way this somewhat mismatched group of little guys (and a girl!) found a way to pull together, make very few errors, hit the crap out of the ball, steal bases, and pitch like nobody’s business. The odds were not in our favor these last couple of games (to say the least!). Two of our coaches got tossed from the tournament for arguing with the ump. Tommy, the rock of the team, fell off his bike over the weekend and badly hurt his wrist. Despite that, he pitched a beautiful game on Sunday, and played a mean catcher today, throwing out two players at

second base for the last two outs of the game. Josh (whose two little brothers were playing in the AAA championship on the field next to us; they won also!) started us off pitching (and made both catches at second to end the game) and stoic Nick closed us out. Wham!

Kim and Suz came to the game, with Vivian and Emily. Cory was there too, snapping pics, I can’t wait to see what he shot! Of course Nathan’s grandparents were there, they hardly miss a game. And John and A were there as well, like everyone, caught up in the nervousness, eek. Big, BIG crowd at the field tonight (and hopefully good revenues for the concessions!). All told, a pretty incredible experience. And I am so damn GLAD that it is over, OMG, I couldn’t take another stressball game. I’m not cut out for this at ALL, I was sweating bricks the whole time, staring at my feet, ack. A little post-game celebration at DQ and now it’s all done…