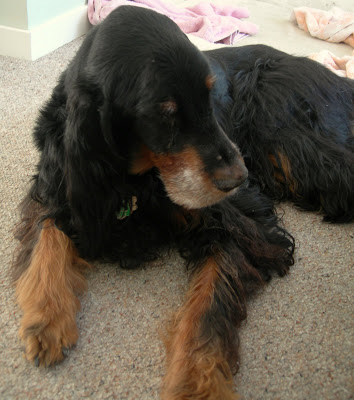 Sigmund Louis Levy
3/29/92 – 3/11/07
A very sad day indeed – I had to put down our beloved dog, Sigmund. He’s been quite frail for the last several months, so we’ve known that each day he’s felt good was a little gift. Not many Gordon setters get to be almost 15 years old. I returned from Shirley Taylor’s funeral yesterday morning – Sigs had stayed with our friend Marty while I was gone, since John is skiing in Colorado, not due back until tomorrow. Marty said that Sigs had had a rough night Thursday night, unable to stand for parts of the night. He was pretty perky yesterday morning 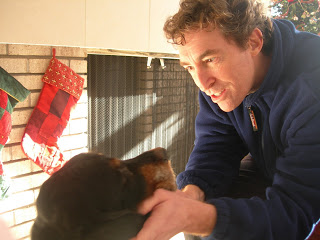 when I picked him up, however, and seemed fine all day. Then all of a sudden last night he was completely unable to walk or stand. Nathan and I got him settled for the night, but this morning he was even worse, very disoriented and unable to eat or drink. I called the Golden Valley Emergency Vet and took him in early this afternoon. They were wonderful and so respectful. They gave me all the time I needed to talk to him and say goodbye. I held him while he passed away and I have to say, having never before witnessed a death, I was honored to be there with him and so grateful for how gentle and peaceful his passing was. Sigmund could not have been a kinder animal. He was as purely sweet as they come and we are sadly aware of the loss of such a gentle soul from our lives. Rest in peace, Roo.