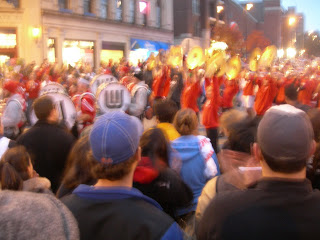 On Wisconsin! Nathan and I are back from our Badger Homecoming Adventure and we had a GREEEAT time. It was a quick trip – 48 hours door-to-door-to-door – but well worth the drive to see the lovely campus in all its fall glory. As a bonus (?) it was also Madison’s annual Halloween Freakfest celebration, didn’t plan on that one, but now that it’s a much more controlled event – revelers have to buy tickets to be on State Street after 6 pm, the street is lit up like a movie set with portable stadium lights, and police on horseback and on foot are everywhere – it was actually fun to see. And hear. As you can imagine, an event called Freakfest is not a quiet endeavor. Then again, nothing in Madison is quiet. (Except State Street the morning after Freakfest, ha.)

Upon our arrival Friday night, Nathan and I dashed down to State Street to catch the end of the Homecoming parade. We in fact caught the very best part – the Pied-Piper Wisconsin Marching Band, dancing their way down the street, the crowd dancing along with them, laughing and singing and waving. We met up with our friend Jon and his

daughter Sofia and made our way over to The Plaza for burgers. Then we walked down to Memorial Union for ice cream on The Terrace, back up State Street for Bucky-wear shopping, and on to the hotel for bedtime. Wiped!

Saturday opened cloudy and chilly, but by game time the skies were clear, the sun was warm, and we had ourselves a perfect football Saturday. Glorious. Nathan and I donned red-n-white everything and set out on foot, following the smell of grilling bratwurst (mmm!) to Union South to meet up with Jon and Sofia to catch the marching band’s warm-up concert. From there we found my friend and Portuguese professor Mary Schil, who had two 50-yard-line tickets for us. Yes, we had BOTH skybox suite tickets (thanks to our friend 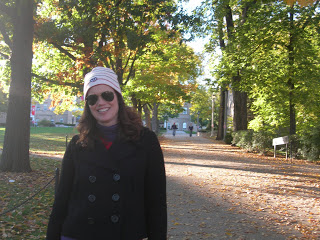 Niko!) and main stadium tickets (thanks to Mary!), so Jon, Sofia, Nathan, and I took turns and reaped the benefits of both views (skybox suite = brats, beer, bathrooms; stadium seats = sunshine, cheering, student-section-watching). Wisconsin beat Indiana 33-3 and Nathan got to see it all… Bucky! The cheerleaders and pom squad! The famous, fabulous marching band! And 82,000 red-n-white, chanting, singing, dancing, screaming fans. Varsity!

After the game, we met up again with Mary Schil, who asked one of the players to give Nathan a tour of the Badger locker room. Nathan met the quarterback and several other players, got head coach Bret Bielema’s autograph, and was pretty much blown away by standing next to 6’7″ guys in football pads. (I feel positively small in Wisconsin, land of giants, it was nice to be back with my peeps. Yeah.)

From there we did a bit of tailgating, then Jon and Sofia had to head home, so Nathan and I walked back to our hotel through the heart of the campus. Bascom Hill, on a sunny fall day, wow. As a coed I was way too busy (or something, ha) to really appreciate what a truly lovely place Madison is – the landscaping, lake

views, architecture, art. The contrast between the elegant campus and the naughty (crude!) behavior of the students is pretty intoxicating. Or perhaps it’s the beer fumes in the air. Hmmm…

Yesterday morning was again sunny and gorgeous, so Nathan and I walked around the capitol square, past several of the buildings I used to live in, including the Gamma Phi Beta house (good photo ops!). As I pointed at different apartment buildings and frat houses saying, I used to date someone who lived in that building, Nathan asked, how many guys did you date? Wooops…

After another burger – this time at State Street Brats; the KK was closed (?) – we drove home. Or, more accurately, we drove to my parents’ to have dinner with Stacey, Cooper, and my brother David, in from NYC for the weekend. My dad made his signature fried pheasant (delicious) and Susanna made her signature gravy (killer), alongside salad and parsleyed potatoes. Yeah, potatoes & gravy, one of my all-time favorites, a very nice welcome-back-to-Minnesota dinner.

And so, today. Monday. Back to school for Nathan (he was kinda bummed) and back to 2007 for his mommy, ha. It’s fun to go to Homecoming, but it’s even nicer to come home.