Happy President’s Day!? Actually, very happy because Nathan is home from school, always fun. We celebrated more yesterday than today, first with brunch at Stacey’s with my mom. We pulled it together pretty quickly (our original plan was to go out, which we bagged when we realized how much more fun little Cooper Cuteness would have at his own house). And as often occurs under those rushed circumstances, something rather delicious happened. Stace set out for Isles Buns for the most killerest cinnamon rolls on the planet – huge, soft and dangerously yeasty, studded with soft pockets of cinnamon and dripping with gooey, creamy icing. And that was brunch, all good. Oh wait! Nope, that was the end of brunch, right, although those lovely buns would have sufficed as the entire meal, quite handily. But heck no, this is me – and the family that made me who I am – we’re talking about here, so there was plenty more, plenty!

Including a pissaladiere – basically a savory French tart, but not a quiche, since it doesn’t contain eggs. How did I settle on a pissaladiere? Well, I started thinking quiche, 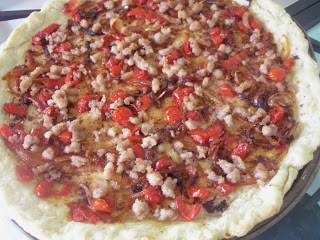 and flipped through Mastering the Art of French Cooking for inspiration and a good short pastry recipe. Then I started thinking that Nathan does not enjoy eggs (to put it mildly), and that I had some delicious sausage that could make an interesting tart filling on its own, and so into pissaladiere the concept evolved. And what a treat! Buttery crust filled in this case with browned sausage, caramelized onions, and tomatoes. No cheese, no eggs. Really rather fabulous if I do say so myself (and apparently, I do)! The crust is quite rich, so needs a good chill before quickly rolling it out. But it’s worth the wait. We had it alongside a simple salad, which kind of hilariously served as a palate cleanser before… Those damn buns! My goodness we were full, not very moderate (despite my silly Valentine’s Day pledge), uff. (Recipe posted in comments, below.) 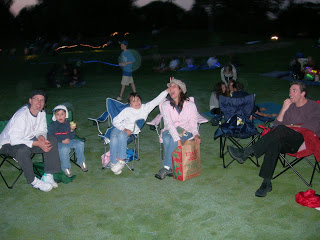 Then we rushed home to greet the Shubert family! Yay! As many of you already know, wherever the Shuberts go, fun follows… In this case, they were here as a huge favor to me – the Coreman sweetly agreed to help me set up my new Mac system. Yes, I have made The Leap, this is my first official post on a Mac, not a PC. (Pause and listen to the singing angels…) I have a bit of a learning curve ahead of me, since of course we have made things as complicated as possible with our music and photo libraries, network, incompatible email, and printing with a printer that doesn’t much like Macs, but we’re pretty well on our way. Hey, at least I’m posting this! Much faster, much prettier (gorgeous, in fact), much more fun. And blogging was already fun! So woo hoo for additional fun! (Now I just need a kickin’ new camera to take better food pics with…but don’t hold your breath on that one, awww shucks.)

Suz and the kids tagged along to make for a very fun afternoon! A little beer, a little buttery popcorn, some major video-game playing for the kids, some major Mac Magic for us adults, not our typical Sunday by a long shot – as in, very productive! Hopefully today will yield the same progress, and tasties (of course), stay tuned…