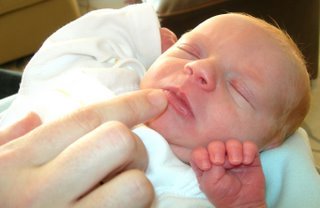 Just have to a say a quick good morning to Cooper (what else is a blog for if not for posting cute pics of Cooper??? That’s Stacey, taking in the cuteness of his full little lips…)

After my heavy shepherd’s pie/beer/soda bread dinner last night – whew, I am still full – I’m thinking a light, brothy soup is in order for dinner this evening. With a veggie first course, not sure yet what it will be. I’ll think about it for a bit and check back in. I wish I’d thought it through yesterday, so I could have picked up a few more things while I was at the store, but I wasn’t that organized this week. I do usually create a meal plan for the week and map out at least a few dishes so I’m not at the store every damn day. The shepherd’s pie idea was impulsive, however, and I made the mistake of shopping just for that. So…I’m quite sure I’m taking another trip down the aisle(s of Byerly’s) today. Anyone need anything?

Here’s another picture I took yesterday, he is a little squeaker, isn’t he? I got some good shots, the sunlight streaming in the windows was truly lovely…

Enhanced by all that snow, I suppose. Hmmph. I’m still not going to like the snow. I like being a bitch sometimes, it’s my legacy, and I claim it. I’ve spent my whole life trying to be a nice girl and you know what? Turns out it’s not always such a good idea, you get taken for granted and taken advantage of, not always, but sometimes, and I’ve decided that sometimes is too often. You also get damn mad about it, understandably. So, once again, all things in moderation are good – including being nice. Hello, 40! Hello, half-way through my life! Hello, being judged isn’t nearly as bad as I thought it would be! Hello, freedom!

Well, whew, pardon the cry for freedom, back to more Saturday concerns. Time for me to hang a bit with Johnny. And oh, I apologize for my blog being inaccessible or doing weird things (double posts, broken links, etc.). Blogger is having some sort of problem with one of its servers, clearly the one that my blog is on, and even this morning it’s partially unresolved. It’s been days! Irritating! And sorry!

OK. Onion soup, that’s what we’re having for dinner. Definitely some substance, what with the cheese and crouton (it’s worth noting, there’s no need to overdo the cheese, it can be quite moderate), but brothy and lovely under it. We’ll figure out some kill wine to partner. And a first course of sauteed baby carrots and fennel, with dill. (I’m somewhat inspired by the Barbara Kafka interview I heard on MPR this a.m., marvelous woman, chatting about her new vegetable cookbook, Vegetable Love– which I am all over – while she prepared and talked up baby carrots. Great quote/paraphrase: she shared that women approach her and say, but my kids just don’t like vegetables, to which she says something along the lines of, “Then my dear, you should learn how to cook.” Force of a woman, a charming bitch, as it were, perhaps that’s why I’m in the mood I’m in…heh, heh, heh…) So, back to onion soup. I usually prepare a pretty simple version, to rave reviews by John, but today I’m doing a Thomas Keller a la Bouchon cookbook version. What he has to say about onion soup, it’s pretty fabulous. I’ll post it in comments, since it’s lengthy, but if you’re interested in such things, check it out.

I may be learning a lesson in moderation just this afternoon. This Bouchon onion soup? I’ve perhaps bitten off more than I can chew, so to speak. Slicing 8 lbs. of onions wasn’t so bad (because I sliced “only” 5.5 lbs., or one bag of large yellow onions). But cooking them for a total of about, oh, 6 hours will be! Someone didn’t read through the recipe very carefully… Shit. At 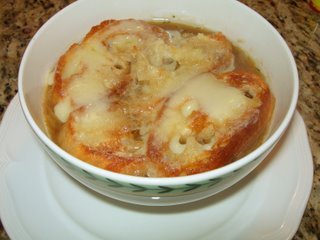 5:15 p.m., I’m 45 minutes into the 1 hour pre-saute. I’m then to crank the heat a bit and saute them for 4 hours until caramelized. Add stock or water and simmer for another hour. That means we’ll eat at…10:30 p.m. Right. Time to innovate a bit, and borrow some techniques from my quicker recipe, like putting a lid on the onions to speed up the caramelization. I’ll see where that gets me and check back.

OMG, hilarious, it’s 8:11 p.m. and we just ate – I had to cut it short. So I didn’t caramelize the onions as much as I should have. And I have no idea – frankly – why the recipe calls for 8 lbs. of onions, thank goodness I only did 5.5 lbs. And that was way too much, since the recipe calls for only 1.5 cups of caramelized onions at the end (they cook down a lot, but not that much). It just didn’t work for me in so many ways, given what can be done MUCH more easily with the Julia Child Mastering the Art of French Cooking recipe, which uses 1.5 lbs. and takes a total of 2

hours. Sigh. Oh well, it wasn’t a lot of work, really, just a lot of time. (I’ll save you the headache and post the Julia Child recipe in comments, below; it’s delicious.)

And, oh, by the way, I prepared the baby carrots, fennel – sliced julienne – and added (dried, reconstituted) chopped morel mushrooms. Chopped fresh herbs (didn’t do dill, since I still had chervil and tarragon in the fridge), little Hope Creamery butter after steaming them. Unbelievably good. We sort of snacked on them while waiting for the monster of all onion soup gratinees to be ready. In the end: all delicious, and healthy, and worth the effort, since it’s Saturday.