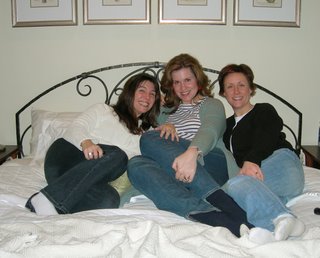 Feminine Hijinx is the featured podcast on Digital Podcast this week – woo hoo! We knew they had asked us to be featured, and filled out the interview form they sent, but didn’t know when/if they’d put us up. But there we are! Very exciting, I’ll be curious to see what it does for our numbers. We just reached 1,000 subscribers a couple of days ago (also reason to celebrate!) so we’ll have a good benchmark to start from! Now if we could be featured on iTunes… (Vote for us on iTunes if you’re so inclined, it helps grab their attention…)

Soooo good to see the sun today! Should make short work of the remaining snow and, just perhaps, this will be the end of snow for the season. I’m ready to throw open the windows, eat on the deck, wake to birdsong. I’m ready.

I have a no-brainer lunch today – quiche and a salad. Nice, huh? The quiche was delicious and I would say didn’t even need cheese (I didn’t put much in anyhow). The leeks, tomatoes, and herbs were rich and flavorful on their own. I’m going to make note of how good they were, in fact, and serve sauteed leeks and tomatoes as a vegetable dish to stand on its own one of these nights. With fish, it would be a knockout.

Oooh, just had a scary thing happen. Had a doctor’s appointment today, and a four-vial blood draw. Came home, decided to do a pilates video tape, half-way through the workout, major, sudden headache and nausea. My first thought was, oh no, aneurysm, here I go, good-bye world. And then I remembered the blood draw. Woops! (Dramatic? Not me!)

For dinner tonight, one of Nathan’s favorites. Basically, a collection of little Greek-inspired tasties from Byerly’s. Toasted pita, eggplant spread, lemon-pepper rotisserie chicken, olives. I make a Greek salad to complete the meal, and it’s really the only prep work I do, other than toast pita.

Mmmmm…this wasn’t even real Greek food, but I loved it anyhow, especially the seriously goat-y imported feta I bought. I’m such a sucker for big cheeses, prrrr… I used to share an office with my Greek friend Mary Pappas and we used to joke about how I was really Greek somewhere in my family. She had her Yaya D and mother-in-law Kathy make all the food for the (Nathan) baby shower she hosted for me. Total blast and OMG, so delicious. Spanikopita, meatballs, Greek salad, rice pudding, baklava. I was in heaven, we all were. John and I had our groom’s dinner at Gardens of Salonica, a feast of platter upon platter of gyro meat, spanikopita, moussaka, pita, Greek fries, salad, eggplant/tsatsiki/tirima spreads, marinated vegetables, olives, and cheeses… Greek wine a-flowin’. Ice-cold Greek beer a-pourin’. On and on and on and on. It was incredible. We were like over-stuffed, plump little dolmades when we rolled out across the Hennepin Avenue Bridge toward home. Opa!