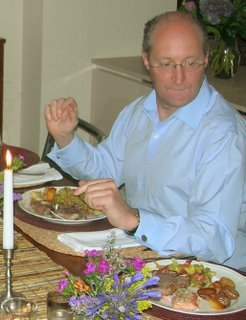 Today is John’s little bro Tom’s birthday. Tom has assigned military codenames for the people in his life. His wife Valerie is Whitewater. His son Cameron is The General. I’m Smoky, so named a couple of years ago while John and Tom were on the phone on a Saturday morning while I was making a little breakfast for John. Tom, like his brother, LOVES food, so he was asking detailed questions while John was raving about the “amazing meal” I was preparing, and how Tom would be so blown away by it. The conversation went something like this…
J: “So, Boo, the Steph-Monster is making me breakfast. Dude, she’s making me a breakfast you would not believe…”
T: “What’s she making you, Boo? A little somethin’? A little somethin’?”
J: “Not just a little somethin’, Dude, it’s a maj. She’s doin’ a maj. She’s frying bacon…”
T, groaning: “Oh. My. God. She’s making you bacon..”
J, laughing: “Dude, slow down, the bacon is not the point.”
T: “Then what’s the point? What’s the point?”
J: “After she makes the bacon, she fries eggs in the bacon grease. In the bacon grease, Boo, it’s a move, I’m tellin’ you, it’s a move.”
T: “Slow down, soldier. Did you just say she fries the eggs in the bacon grease?”
J: “That’s what I said, Boo, and it’s fucking incredible, it makes the eggs kind of smoky…”
T: “Did you just say it makes the eggs smoky? Smoky! I’m calling the Steph-Monster Smoky from now on… She’s Smo-kaaaaay… Smo-kaaaaay…”

And so I am. John and I have laughed so hard about that conversation because of how excited Tom got about the bacon, like that was the point of the story, when it was only the introduction to eggs fried in bacon grease, apparently a New Concept for New Yorkers. Oh, what they’ve been missing all these many years. Happy Birthday Tom!