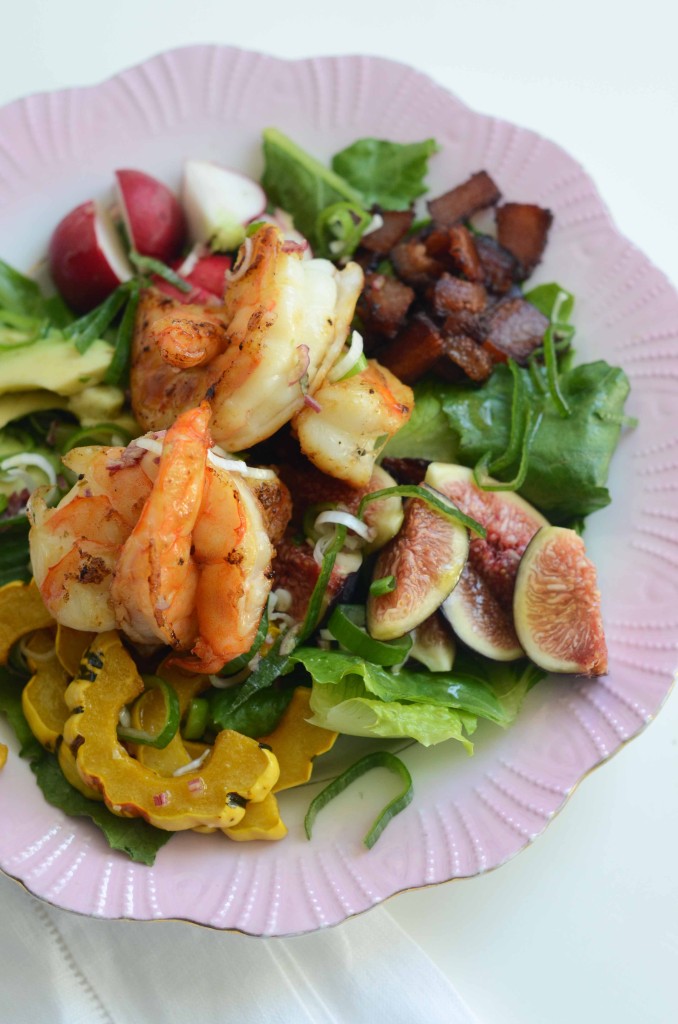 I was going to call this End-of-Summer Salad but that seemed a bit too bleak. The markets are still loaded with peak-season produce at least for a couple more weeks – chin up! 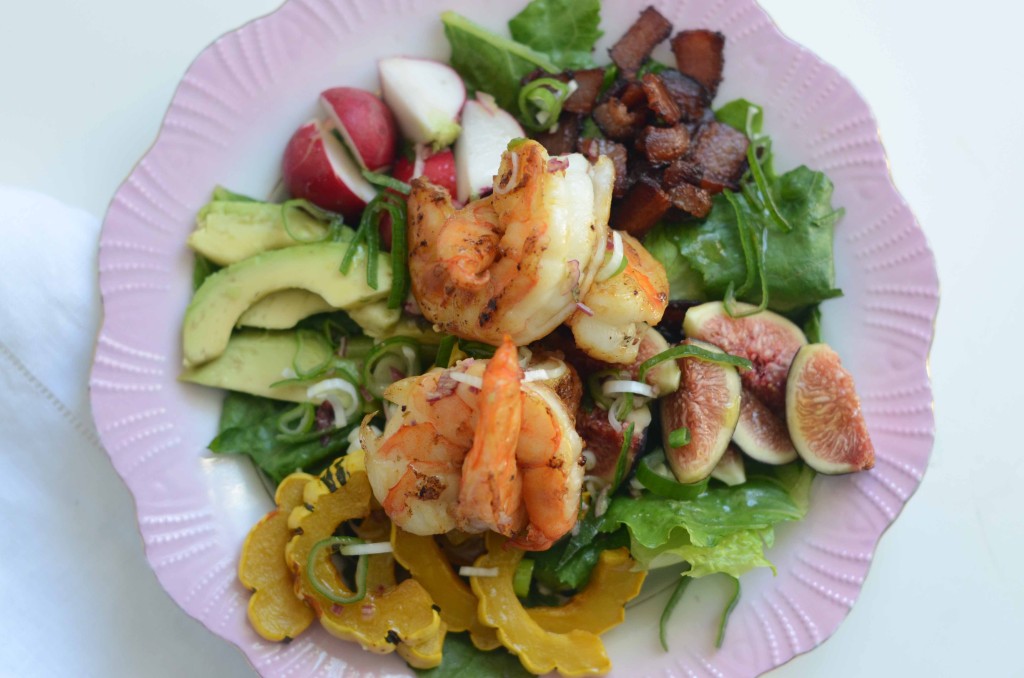 To me, a good entree salad is loaded with a variety of colors, textures, and flavors. If it doesn’t hit more than a few of those buttons, it won’t be truly satisfying, and will leave you thinking – which many people do – that a salad can’t stand on its own as a meal. Oh, but it can! It just takes a bit of creativity and thinking outside the bowl to pull together something craveworthy. There are no hard and fast rules here, but I like to build in these contrasts:

Crunchy and creamy. Think, as in this case, bacon and avocado, radishes and figs, lettuce and roasted squash. Other ideas include cauliflower and olives, crispy chicken and roasted artichoke hearts, or crispy prosciutto and roasted sweet potatoes.

Salty and sweet. Mmmm figs and bacon are a classic combination. Also a touch of honey or maple syrup in a vinaigrette is a lovely counter to salty, crunchy vegetables (don’t forget to finish your salad with a sprinkle of salt). I often add chewy dried fruit – sour cherries are my favorite – and ripe olives to otherwise boring salads and turn something meh into something vroom.

Warm and cold. Warm fish, meat, and or vegetables on a bed of cold, crisp greens is always satisfying. Taco salad is a classic for a reason! 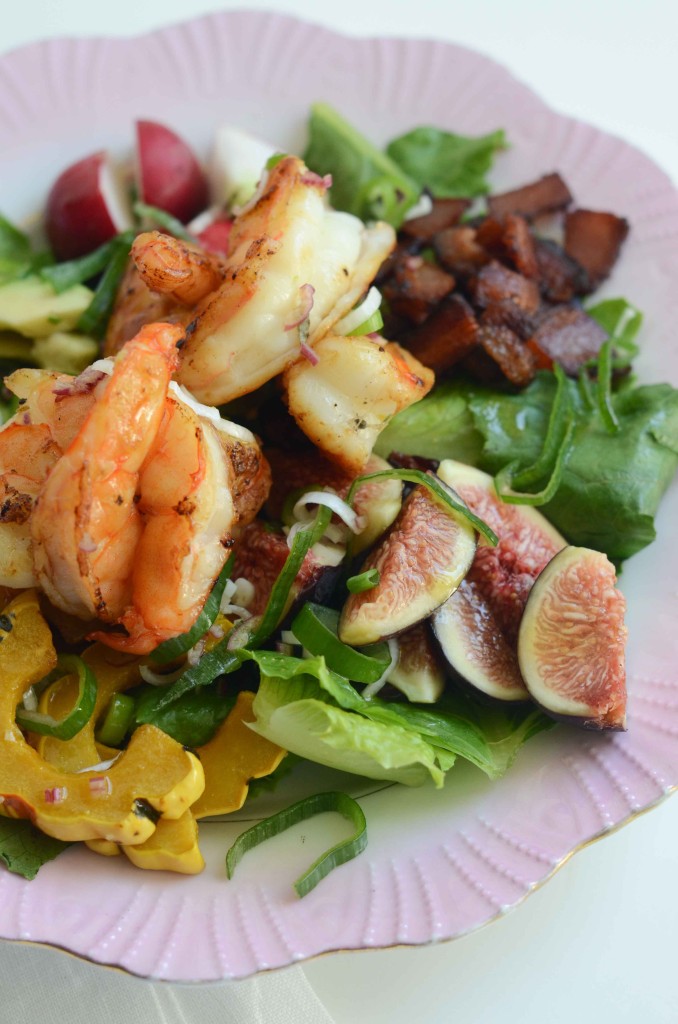 You get the picture, yes? You could innovate endlessly with this salad – kohlrabi for radishes, apple for the figs, different types of squash, sausage for the shrimp. Have fun with it, enjoying the bounty of the season…while you still can!

In a small bowl, whisk together 2 tablespoons of olive oil, vinegar, maple syrup, shallot, and 1/2 teaspoon of the salt. Adjust seasoning to taste.

In a medium bowl, toss squash slices with remaining 1 tablespoon of olive oil. Sprinkle with salt and toss to coat. Spread slices on a parchment paper-lined baking sheet and roast for 10 minutes. Turn slices and roast for another 10 minutes, until tender and browning at the edges.

While squash roasts, place shrimp in a medium bowl or in a large plastic bag. Add 2 tablespoons of the vinaigrette and toss to coat.

Set a large skillet over medium heat. Add the bacon and cook, stirring occasionally, until bacon is crispy. Using a slotted spoon, transfer to paper towels to drain. Remove (saving for another use) all but 1 tablespoon of bacon drippings from the pan. Return pan to heat and add shrimp. Cook shrimp for 3-4 minutes per side, until just cooked through. Remove pan from heat.

To serve salad, divide lettuce between two plates and drizzle with a bit of the vinaigrette. Divide remaining vegetables and fruit between the plates, as well as the squash, bacon, and shrimp. Drizzle with a bit more vinaigrette, top with a sprinkle of salt to taste, and serve while shrimp and squash are still warm.

If you have autoimmune thyroid disease, I have a story that might come in handy for you. I started supplementing with fermented cod liver oil a couple of months ago and at first loved what it was doing for my skin and energy. And then I started wildly shedding hair, my thyroid started to hurt, I couldn’t sleep through the night, I was itchy…and I realized I was having iodine-induced thyroid symptoms. Holy crap! There’s not much information about the iodine content of cod liver oil out there, but cod is a particularly iodine-rich fish so it definitely has some. Apparently some was enough to trigger thyroid inflammation and a whole series of symptoms. I stopped it immediately and several days later my symptoms  started to abate. I share this story because highly nutritious fermented cod liver oil is often recommended on the AIP and for those with autoimmune disease. You may very well be able to take it successfully – it’s a rich source of Vitamins A and D – but be aware that those with thyroid disease are very sensitive to excess iodine, even if also supplementing with selenium.

I’m just finally sorting through the photographs from our Meyer family celebration of Nathan’s graduation, back in June, at Create Catering & Dining Studio in NE Minneapolis, a wonderful place to have a party if ever there was one. Chef Philip Dorwart is one of the most talented chefs in the Twin Cities and he has a fantastic team at Create, whether they’re catering on or off site. 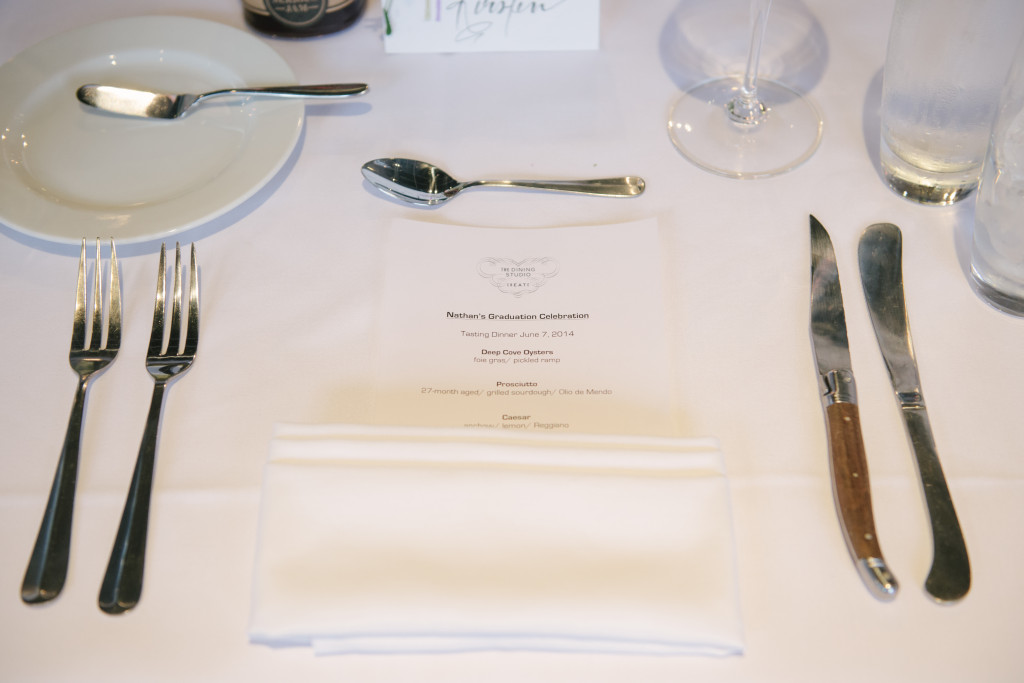 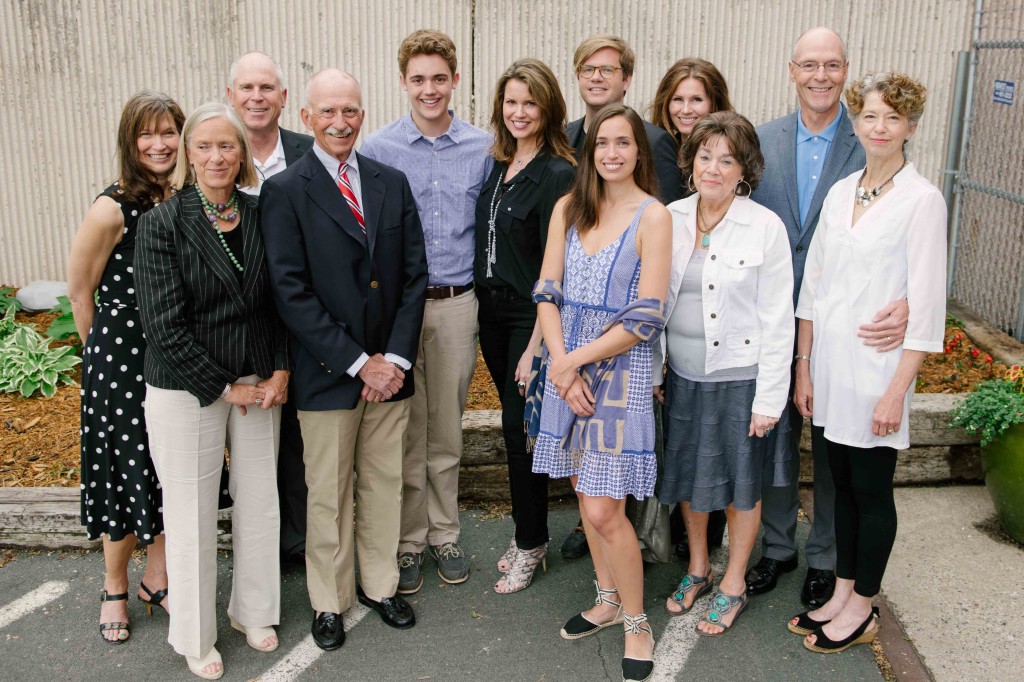 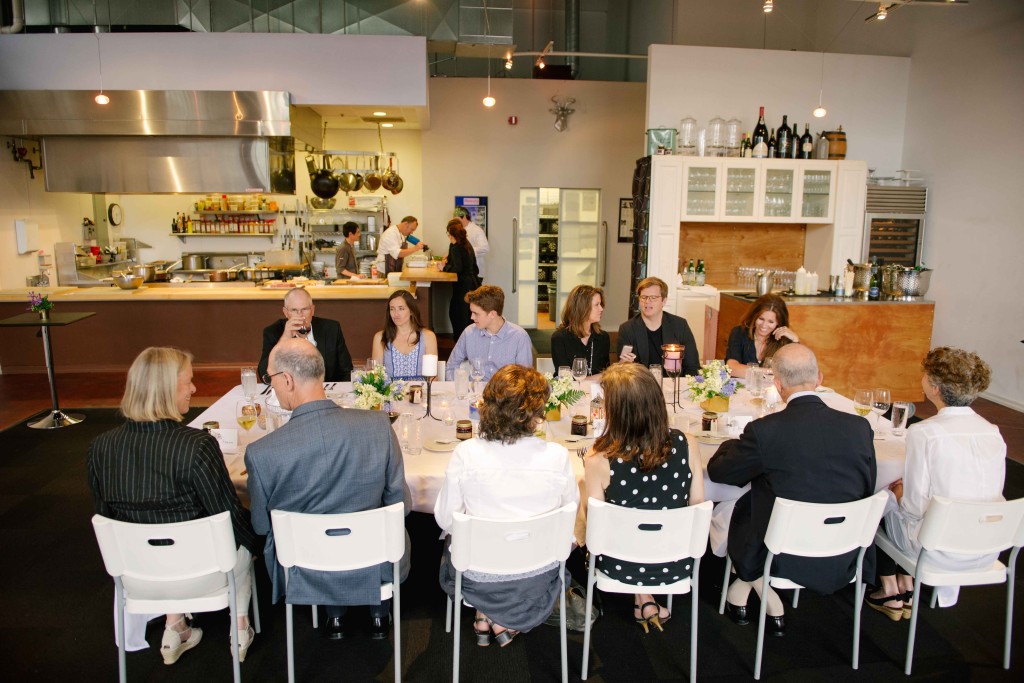 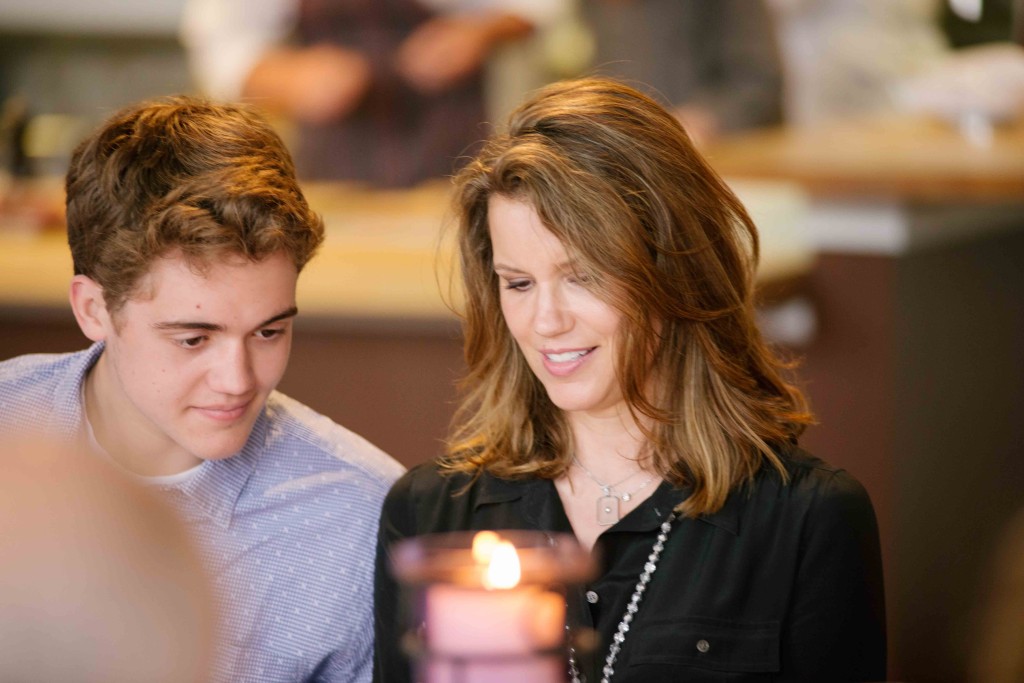 I gave Chef Dorwart a list of Nathan’s favorite foods and he worked them all into an incredible menu of appetizers and courses. They created AIP versions of each dish so I ate like a queen – what a treat! My whole family agreed it was one of the best meals they’d ever – yep, ever – enjoyed. My thanks to Kate NG Sommers for the photos – best idea I’ve had in a long while, to hire someone to take pictures instead of trying (and failing) to do it myself. I can not host-n-shoot and with a once-in-a-lifetime event, I am so grateful to have terrific family photos.