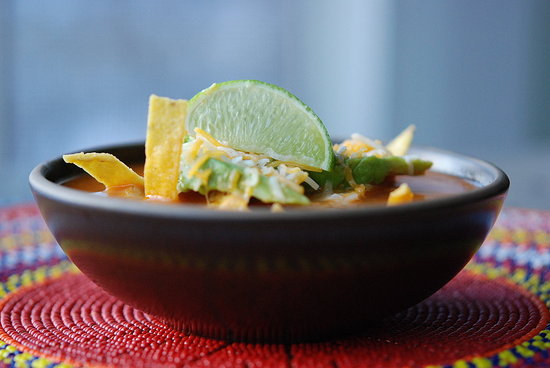 Spring may be right around the corner, but I’m freezing right now. Brrr! I keep going out at night without stockings on, dying to wear something other than boots, hoping that because it’s now March, 20 degrees will feel more like 50 degrees.

Not that 50 degrees is warm enough to go stockingless either, but if you’re from ’round these parts, you know how it goes. When you ride a +100-degree annual temperature swing, it seems perfectly logical to skip stockings while wearing a wool coat and giant scarf.

At least it does to me. 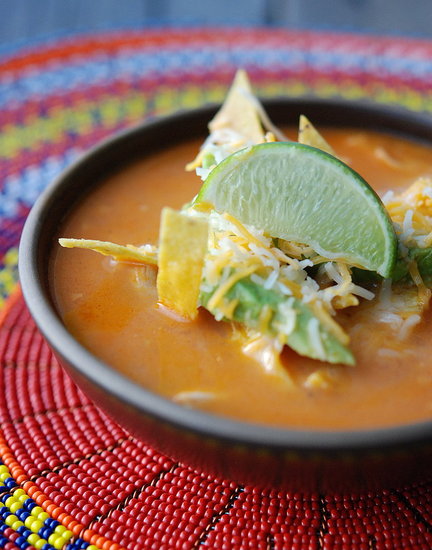 It’s all about bridging the seasons, mixing things up. Given hot comfort with bright, fresh flavors, tortilla soup fits my fickle mood. Make it as spicy as you like, then layer in the good stuff – cheese, avocado slices, a squeeze of lime, and of course crunchy tortillas.

It takes a bit longer to start from scratch, but it’s so worth it for the rich chicken flavor. You could definitely do this soup in a crockpot of you’re so inclined. The final puree gives the soup body and thickness without adding flour or masa.

Place chicken in a large Dutch oven, add the remaining soup ingredients, set over high heat, and bring to a boil. Turn heat to very low, so that broth barely bubbles (you can also transfer the pot to a 225-degree oven). Cover and simmer for 1 1/2 hours, or until chicken is falling-apart tender.

Remove chicken from broth and set on a cutting board to cool (it will likely break into pieces as you transfer it). Skim fat and residue from the broth. Using an immersion blender, or a stand blender in small batches, puree the soup and return to the pot.

Remove and discard chicken skin, then remove chicken meat from the bones and cut into bite-size pieces. Add chicken to the pot (if you don’t use it all, the remaining chicken makes a terrific chicken salad!). Season soup to taste with salt and pepper. Serve with garnishes.