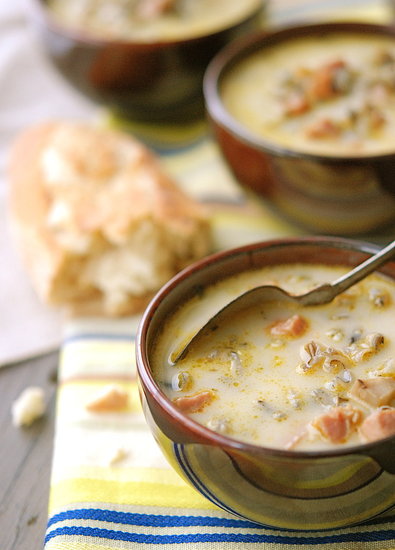 When it snows, I make soup. And complain. And take ridiculously long baths. And pretend like I’m still on vacation.

John and I were in Costa Rica last week and it was…heavenly. Too heavenly. I have been in a massive funk ever since we returned.

The lovely view out of our home bedroom window that I normally love? Hideous to me. Who wants to see colorless snow after a week of blue-green ocean views? I was blessedly, easily warm the whole time we were there. I basked (too much) in the sun, swam in the ocean, listened to music, read two great books, and messed around on Twitter (the hotel had perfect wifi and ATT service, even on the beach) with my foodie friends while John surfed.

I had a blast. 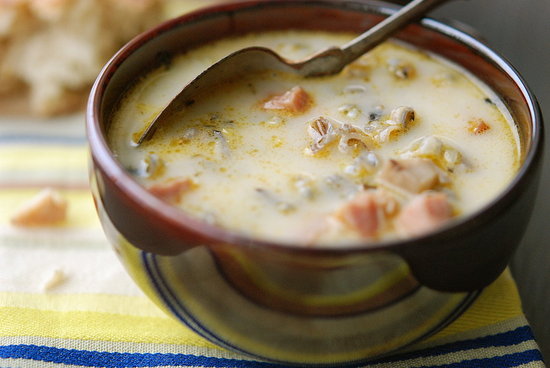 It does make me wonder if I’m the type that should just grind through the winter and save the escape for the end of the season? Apparently I’m not very good at changing gears. It if were late March instead of February, I might be handling it all better…

A first-day-home dinner with Debbie & Stu The Wine Genius Williams at Corner Table Restaurant in Minneapolis helped. A double course of fresh eggs (poached over polenta, softly scrambled, rarrr) helped. As did the pork three-ways entree I inhaled (braised shoulder, belly, & sausage). Plenty of wine, serious laughs, a reason to go out with my minor tan – all good.

This soup helped too. It’s got a bit of wild rice, plus is quick to pull together while pleasantly smoky from ham. A splash of cream at the end makes it all snowstorm worthy (we’re receiving 8-10 inches as I write, sigh) without adding too much richness.

On a completely separate note, I did this short interview with Twin Cities Spark a few weeks ago. Fun!

In a large saucepan over medium heat, melt butter. Stir in ham and saute until lightly browned, about 5 minutes. Stir in leeks, carrot, celery, parsnips, mushrooms, garlic, and thyme and saute for another 5-7 minutes, until vegetables are softening. Stir in rice, then broth, and bring to a boil. Turn heat to low and simmer, partially covered, until rice is tender, 45-50 minutes.

Stir in cream and season with salt & pepper.