OK, so this latest assigment (for the online food styling class I’m taking) was to prepare a meal, then plate it/prop it three different ways. I seared a few pieces of salmon, made a quick couscous, and used sauteed red onion rings, chopped raw red onion, and dill for garnish. I’m hitting myself that I didn’t put the beautifully rosy salmon on a blue plate – duh – but I was in a big rush and just grabbed red, patterned, and white plates. This class thankfully isn’t about the photography, since I am pathetic at “seeing” the shot through my camera. I tend to line ‘er up and shoot, then when it’s on my computer…ding, ding, ding! I see right away which angles worked and which didn’t. When it’s too late to go back. Ah well, that’s why I’m taking a class.

The overall best-looking shot ended up being on the patterned china. 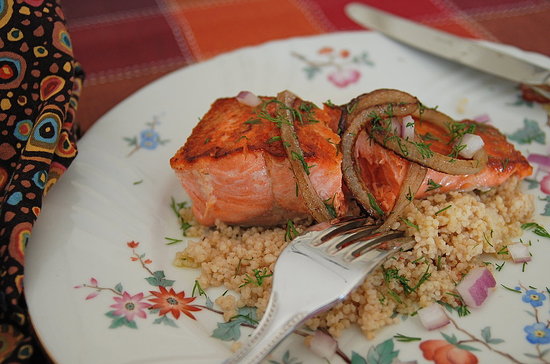 I really like how the rare salmon itself looks in the next shot, but it is lost on the red plate (sigh). 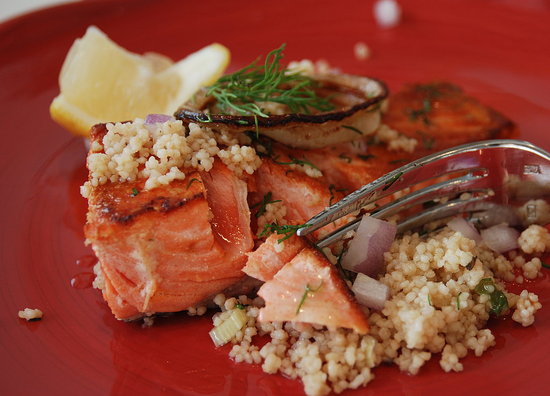 The third attempt was completely weak – I was rushing for an 11:30 appointment. I added extra food, and didn’t deconstruct it (for contrast with the previous two shots) – as a result it looks like a slab of salmon with tired, wormy peppers and beige couscous, all lined up like nervous soldiers, ha. 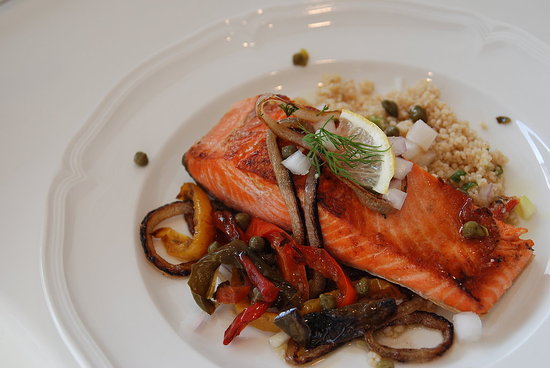 I’m learning quite a bit and really enjoying the process. My biggest hurdle right now – lack of daylight hours. Pictures I take in low light or artificial light are just…yuck. Learning to use my equipment will help – I just haven’t had time what with Thanksgiving et al. Over the next couple of weeks, that will be my goal – to be able to take the occasional flash photo and have it turn out appealing. Especially in Minnesota, in December, when daylight hours are a seriously scarce commodity. (Today’s count – less than 9 hours. Ouch.)

Anyhow, for dinner tonight (no, we didn’t have salmon, I pretty much trashed it for the photo shoot), I made shrimp saltimbocca. With wild caught shrimps from Whole Foods, so sweet and you know, shrimpy. The way they’re supposed to be. Even for those picky about fish (aka my family), a real crowd pleaser.