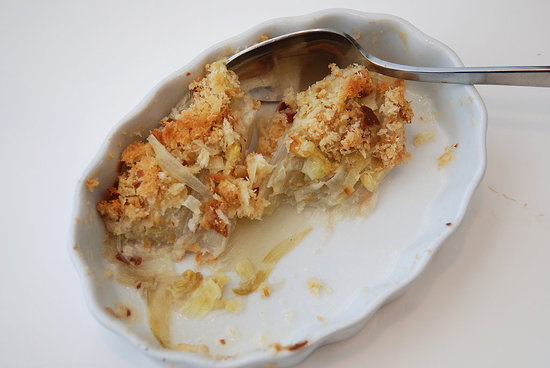 I mentioned below that part of the dinner we made for Rishia & Andrew Zimmern was an endive gratin. Several years ago, we had the Zimmerns over for dinner and I’m not sure why, but I had several heads of endive in the cooler. I also had half of a loaf of challah bread, and somehow I decided that an endive gratin, topped with challah crumbs, would be a great side dish to whatever I was serving (I’m thinking it was lamb). It was apparently a good choice, because Andrew has reminisced about the gratin a few times since and even requested it for dinner last week, so here it is, with a brand-new name – Andrew’s Endive & Leek Gratin. 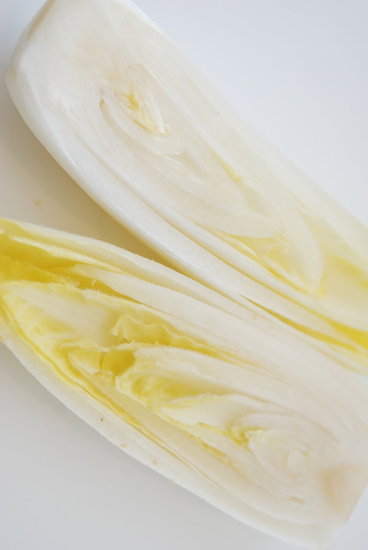 Most people know endive (ahn-deev or en-dyv, you choose, or you could use both, randomly, as I do, perhaps because I feel a little dramatic saying ahn-deev) in its raw state and as such – with pretty, sturdy leaves perfect for dipping, or in salads where it lends a pleasant bitterness and good crunch – it’s completely delicious. 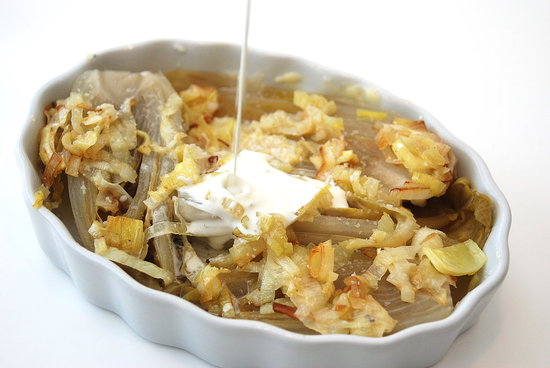 But endive also makes a beautiful gratin, especially in contrast with sweet leeks. From under buttery breadcrumbs, endive emerges surprisingly silky and savory, a perfect complement to a roast or even fabulous on its own for a light supper.

Do not skip the drizzle of cream (a general rule to live by, now that I see it written here). 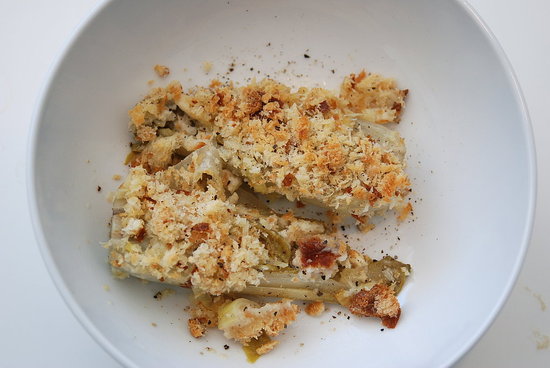 Stay tuned for Part III: Molten Chocolate Cakes. Andrew shared his recipe, so now you too can hurt yourself a little bit with melting chocolate-y insanity, uff (so good). Moderation, wherefore art thou?

Preheat oven to 375 degrees F. Coat a 9×13 baking pan or casserole dish with butter. Fill a very large skillet with about 1/2-inch of water, the lemon juice, garlic clove, 1 tsp. of salt, and bring water to a simmer. Lay the endive cut-side down into the water and cover the pan. Simmer for 10-15 minutes, or until the endive base is very tender when pierced with a fork. Using tongs, remove endive from the pan and lay cut side up into the buttered baking pan. Sprinkle lightly with salt and freshly ground pepper.

Discard endive-cooking water. Return pan to medium heat and add 1 Tbsp. of butter. When it’s melted, stir in the leeks, garlic, and a little pinch of salt and saute until the leeks are quite soft but not browned, about 10 minutes. Distribute leeks over the endive.

In a medium bowl, whisk together the chicken broth, cream, a pinch of freshly ground nutmeg, and a pinch of salt. Pour over the endive and leeks. Use the same bowl to toss together the challah crumbs and 1 Tbsp. of melted butter. Distribute bread crumbs over the endive and leeks. Put pan in oven and bake for 20 minutes or until nicely browned and bubbly. Let sit for 5 minutes before serving.