Afternoon Tea in London! A highlight, of many highlights, this past weekend with Bartley and Maud Bryt. A quickie indeed – flew overnight Thursday, returned yesterday. But we more than managed to pack our two London days full of veddy London experiences. Basically, we had a BLAST.

Bartley and Maud flew from New York to Stansted airport; John and I flew into Gatwick. We all arrived around the same time Friday noonish at the charming and comfy Number Sixteen Hotel in South Kensington. After a quick shower and change of clothes, we were out the door, into the mid-50-degree sunshine (which persisted all weekend, quite lovely), and on our way to our first meal, lunch at Olivetto’s. After various pasta 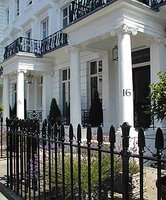 dishes (artichoke, fish roe, and crab)and a delicious shared bowl of chickpea soup with crispy pancetta, we walked a bit. Consulted the map. Talked to a few passers-by. And then hopped on a bus – double-decker, of course – and a few stops later spontaneously back off again when John spotted a sign for Churchill’s Bunker Museum and said, hey, I think that’s supposed to be great. And it was.

Let me pause here to say that that moment, of Random Spontaneous Serendipity, defined our trip. We set out each day with a loose plan (thanks to John’s and especially Maud’s extensive pre-trip research), heading in a general-ish direction, and then proceeded to modify it on-the-go as compelling sights, smells, and nothing more than plain ol’ gut instinct moved us. It was brilliant, brilliant.

For instance, dinner Friday night. At first the plan was to head back to the hotel around 4 p.m. for a short nap, shower, and change of clothes, 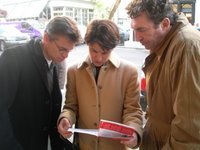 then out for a late dinner. But as we made our way through the Churchill museum, the David Hockney exhibit at the National Portrait Gallery, and a half-pint of ale at a smoky pub, we realized that while we overall felt pretty damn good, every time we slowed down a bit we felt exhausted and that a stop for a nap would be the end of our day. So we blew off the nap, kept walking around in the refreshingly (and unusually) crisp, dry air, and accidentally stumbled onto the tail-end of a very British, very spiffy wedding at St. Margaret’s church near Westminster Abbey. A parade of characters, there’s no other way to say it – a gorgeous, over-the-top, jewel-colored parade of clothes, coats, ties, gloves, and of 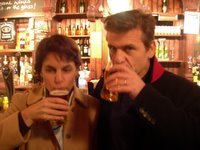 course, ladies’ hats. After lots of speculating, Bartley finally asked one of the passing guests who had been married… Turned out to be Clemmie Hambro, Winston Churchill’s great-granddaughter!

Chuckling at our (sort of) Churchill-themed day, and the colorful spectacle of upper-class British-ness we had just witnessed, we eventually hopped in a cab to go “somewhere” in search of an “Indian, Lebanese, or whatever looks good” restaurant “near our hotel.” We were briefly side-tracked by 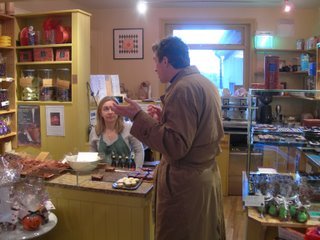 Chinatown, thinking we could find great Chinese… But nothing jumped out at us (in fact, several options positively repulsed), so we rather organically flowed back to our original plan and ended up enjoying an informal, delicious, Middle-Eastern dinner of warm breads, cool spreads, salty pickled vegetables, chicken kebabs, and a savory/sweet stewed lamb with rice, washed down with plenty of wine, at a cozy spot near enough the hotel to allow for a digestif after-dinner walk.

We all slept like rocks in our comfy beds, swathed in one of my very favorite indulgences – decadently cool, crisp, freshly-ironed linens, ahhhh. After an unfortunately not-so-comfy (and curse-filled!) morning shower for John, who had not only the hot water disappear, but then all 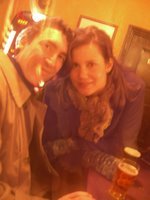 water disappear half-way through soaping up, due to maintenance of some sort, ack, we were out the door again. We scored a lovely, sunny table and yummy brunch (seriouscoffee, nice) at another cafe that just “felt right,” followed by must-do chocolate shopping for John, then hopped on the Tube to make our way to the Tate Gallery of Modern Art. We lucked out – again – with an unplanned, gorgeous walk along the Thames before we breezed through the Tate’s permanent collection.

After another now-necessary post-museum walk (what is it about museums, as much as I love them, that steals every bit of energy from one’s body and pours cement into one’s head?), we cabbed over to Liberty department store for shopping and – again, on a whim – the above-mentioned afternoon tea. What a treat! I’ve always wanted to have afternoon tea but have never pulled it off – how perfect to finally achieve it in London!
This was the real deal – pink champagne; smooth-as-silk Darjeeling tea with milk and sugar; dainty, tender celery, smoked salmon, 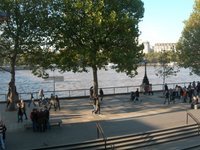 Pleasantly stuffed, but running a bit late for our 7:30 p.m. theater tickets, we rushed back to Number Sixteen, changed clothes, and set out to see Tom Stoppard’s Rock’n’Rollat the Duke of York Theater. A politically complicated, yet funny and music-filled story, we all four thoroughly enjoyed the performance. Off again, a quick walk over to our 10:45 p.m. dinner res at The Ivy, a trendy London see-and-be-seen table. Bartley and I opted for (their elegant interpretation of) traditional Brit fare – he had shepherd’s pie, I had fish & chips with a lovely pea-mint puree. Both dishes were excellent – filling, but excellent. I also opened with a delicious “salad” of lentils, dandelion greens, and braised ham hock. A tender, salty, creamy winner, yum. John and Maud opted for lighter fare – onion soup, salmon, 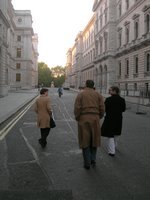 spinach salad. Lovely burgundy wine, smoooooth and rich, baby, mmm. After a few bites of warm spice cake and cheeses for dessert, we were toast. Time for bed, at 2:00 a.m. (!), and the end of our trip. We said our goodbyes in the hotel lobby, headed off to our respective rooms to pack and sleep a (very little) bit, and made our separate ways back home yesterday.

A lot to say for only a two-day trip, huh? Sorry, I’m just excited about everything we experienced, I so enjoyed myself. Plus, after 12 solid hours of sleep last night (!), I’m positively feeling my oats today! What a weekend, my friends, wow. It’s obviously not ideal to have only two days in London, but we sure made the best of it and enjoyed every single minute, of exploring the stunning city, of course, London is very beautiful; but particularly of our time alone with Bartley and Maud, basically two of the smartest, coolest people on the planet that we just don’t get to see nearly often enough. So guys, where are we going next year?!

OK, I’m out of here, gotta walk off my scones, clotted cream, chips, and ham hocks…