No, not me! Stephanie Sanford, aka Steph, Little Steph, Sanyer, Severine, my roommate, bridesmaid, quarter’s partner, and (with Kim Borgen) my BF since Schroeder Jr. High. My little sister Etta says she’s been raised on Stephanie Sanford Stories and it’s quite true. Everyone loves Stephanie Stories, she’s one very funny chick. I hope you have a fab birthday my dear friend!

Earlier this week Suz and I were cracking up about lameass high school jobs and their even worse uniforms – Stephanie at Orange Julius. 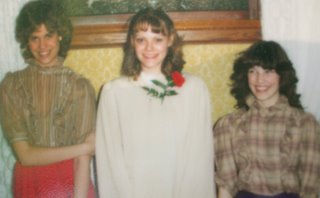 Me at Bridgeman’s. And Suz was telling me about her stint at her local grocery store deli, and the lunch she served a customer one day. The guy ordered roast beef or the like, and a vegetable, and butterscotch pudding for dessert. He took his food, sat down at a little table to eat, but returned with the pudding – turns out Suz had dished him up a nice bowl of nacho cheese for dessert. Mmmm… DAMN I laughed at that! Full-on tears, whew. Such airheads! I can’t believe anyone paid any of us to do our jobs so badly. (And don’t even get me started talking about the mistakes we made driving, like Sanford hanging a right onto a railroad track… Scary. Hilarious. But scary!)

Ah, well, no nacho cheese on the menu for tomorrow. I baked brownies today, and made dressing for the cabbage salad. Tomorrow the turkey goes in (of course), plus I’ll bake challah, roast potatoes, whip cream, assemble the salad, and finish the gravy. Hope your prep is going smoothly as well!