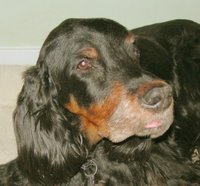 I love it when Siggy Roo’s jowls get stuck in his teeth, it’s so endearing! This weather is hard on the old guy, I can see him picking up his feet while he tries to pee – not easy when you have long, shaky legs. He pulled it off, but just barely. He’s such a sweetie. Rrrrrrooo!

And speaking of sweeties, Nathan and I are having a mom/son night out tonight. Dinner and a movie, I’m really looking forward to it. Haven’t decided yet where we’ll eat, I’ll see what he’s up for. He digs Greek and Chinese particularly. And of course, the ubiquitous pizza, his true fav. He occasionally gets a bit burned out on ‘za, however, so hopefully he’ll be up for something a little more interesting. Maybe I can talk him into Mexican, I’ve had a hankering along those lines… Hmmm…

Today, a quest for productivity of some sort. Didn’t achieve much yesterday, I have to confess. I just don’t want to go anywhere when it’s -10 degrees, funny thing. But I do have errands to run, I’ve got to brave it today. And of course, laundry is not very dependent on the weather, ha. No excuse there. OK, Stephanie, kick ‘er into gear!

OMG, I just whipped up the most incredible lunch for myself. Wow. I should have paid closer attention to how I did it, I was just cooking a craving, basically. Talked to Nathan, he wants Chinese tonight, and I have that above-said Mexican desire, so I pulled out a can of pinto beans, made a quick chili sauce to simmer them in, cooked myself a couple of fresh tortillas (sooo easy, and sooo good, that store-bought won’t much move you again), topped it all off with chopped arugula and raw onion. Even had to have a quick glass of red with it, it was so delicious. Damn! Now THAT took care of my Mexican craving, and it wasn’t nearly as naughty as a big, cheesy burrito. (I’ll write up what I did and post it in comments, below.)