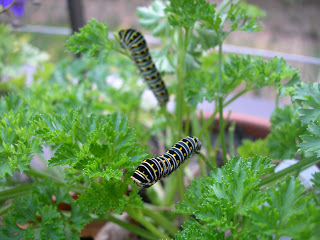 I braved the heat and humidity to snip some herbs from my deck (OK, it was only a few steps, but it’s HOT out there!) and found a couple of colorful visitors (black swallowtail caterpillars!) feasting on my parsley. And some pretty little blooms on my rosemary. Very not October (poor buggers, I don’t think they’re going to make it to butterfly stage this late in the season), but lovely!

The rosemary is for the appetizer I’m making for Nathan’s class parent party tonight. A room-temperature pizza, lightly topped so it’s almost like a hearty foccacia bread. It’s very easy, do-ahead, and most important (!), tasty. I vary the

toppings, depending on what I have in the cooler. Tonight’s version has a bit of crisp bacon, fresh tomatoes, said rosemary, caramelized onions, olive oil, and mozzarella. Sprinkle of coarse salt, few grinds of pepper, good stuff. (Recipe posted in comments, below.)

Man, I think I have to wear a tank top to this party tonight – 90 degrees is truly sweltering, even if it is October. Wild.