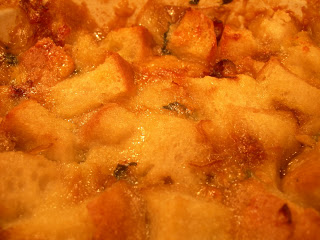 Unctuous. Isn’t that a fabulous word? Chef Judy Rodgers uses it in her gorgeous The Zuni Cafe cookbook, specifically in her recipe for Chard & Onion Panade with Fontina, which I made today. And oh, unctuous it is… smooth, creamy, and rich. Almost deadly, in fact – it is so good, and so rich and substantial, I could imagine actually hurting myself with this thing, this panade. Good thing I’m a moderate epicurean (wink).

So, a panade, what is it, other than unctuous and substantial? Imagine a cross between a silky, savory, crusty bread pudding and the best gratineed French onion soup you’ve ever had and you’ll be starting to get the picture. Alongside a roast, it would stand in as a moist, decadent stuffing. On its own, it would replace a risotto or pasta. Oh dear, I feel an obsession coming on…

And this isn’t all I made today! I also simmered a simple soup, thinking Nathan wouldn’t dig panade (I was quite wrong, it turns out). 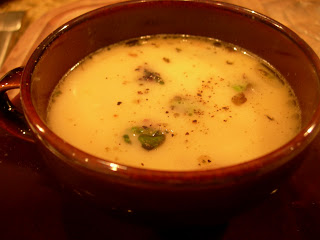 Chicken broth, little bacon, onions and garlic (in a bouquet garni, Nathan’s not a huge fan of lots of chopped onions in soup), herbs, and chicken, with a touch of cream to finish. And quickly sauteed bits of asparagus and a drizzle of truffle oil for John and me. With a generous grinding of black pepper, it was absolutely delicious.

Way to put this snowy day to good use, eh? I’m sitting in front of a big, roaring fire as I type this, pleasantly full of soup and (mostly) panade, while John reads next to me… Nice. I’m thinking our soft bed (with clean sheets, yay!) is going to feel more-than-good when I slide in. Ahhhhh… (Recipes posted in comments, below.)