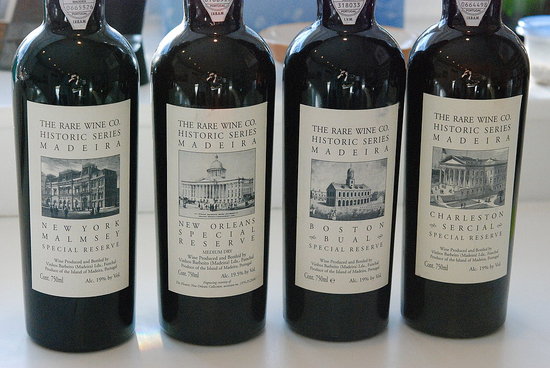 Yesterday I caught an early version of Eric Asimov’s The Pour column on the New York Times Dining & Wine page.  The headline – A New Course for Dessert Wine – jumped right out at me.  I prefer dessert-style wines paired with savory foods (foie gras, blue cheese), so I clicked through and was delighted to read about Madeira wines in particular.  Asimov acknowledges that “…serving a sweet wine with a savory dish may strike many people as odd – unless they live in one of the great sweet-wine centers of the world.”  But he goes on to give several enticing examples of sweet wine/savory food pairings, all of which sounded delicious: Sauternes with lobster, auslese reisling with lamb vindaloo, and his own personal experiment, Madeira with skirt steak and pickled Vidalia onions.  He tasted the steak with two Madeiras, both from the Rare Wine Company’s Historic Series. 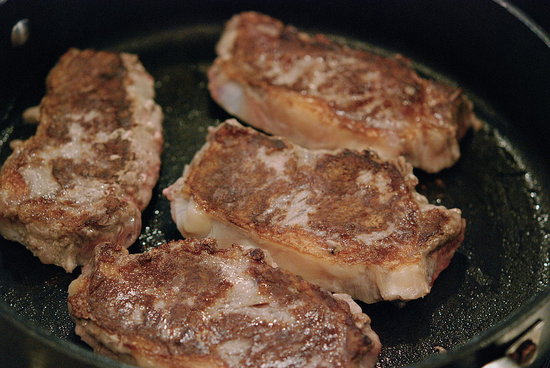 I quickly sent the link to both Stu The Wine Genius Williams, and my husband John, who happen to work together.  A few minutes later my phone rang – Stu had read my email, and the article, and was just about to run an errand, so offered to pick up the Madeira mentioned in the article for us to try.  Yes!  (The Rare Wine Company’s Historic Series Madeiras are distributed in Minnesota by the New France Wine Company, info@newfrancewine.net, 651-698-2533.)

I decided to caramelize the onions to bring out their sweetness, adding sauteed mushrooms and a splash of the Sercial to finish.  Since our grill and deck are covered in snow, I just pan-seared the steaks on one side and finished them in a hot (500 degree) oven.  I prepared the onions first, set them aside, then prepped the steaks.  When the steaks were done, I transferred them to a cutting board to set up, then sauteed the mushrooms in the (fabulously crusty) steak pan.  After adding the splash of Madeira, I stirred the caramelized onions into the pan, sliced the steaks, and served the steak with the onions and mushrooms alongside.  The Sercial was as delicious with the crusty, salty beef and sweet onions as promised.  The mushrooms added an extra earthy note that complimented the sweetness nicely.  All good.

My next try is likely to be an Indian-style curry, with the Boston Bual (sweeter than the Sercial, which is the dryest of the group), which would be a stunning combination, I think.  I’ll let you know how it goes.

In the meantime, I plan to finish off the Sercial with some sort of fabulously toasted ham and cheese sandwich.  Or with another mushroom saute – I’m telling you, the splash of Madeira to finish the mushrooms was so delicious, I could have had just that for dinner.

Big thanks to Stu and New France Wine Company for all the fun!