Nathan’s Flap Jacks for breakfast, so named because the recipe came into our repetoire via the cooking class Nathan took in July. He won’t much eat them, but that’s OK. He’s very proud of how thoroughly I’ve embraced the recipe, so he happily lays claim to it. It’s a toss up (ha), because I love pretty much any pancake, but I 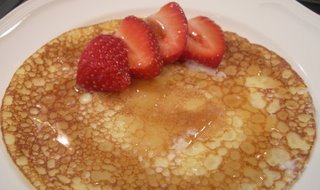 think crepey, eggy, paper-thin flap jacks, smokin’ hot out of the pan, topped with a little pat of butter (and honestly, nothing else, although fruit and a drizzle of syrup are also nice touches) are the KILL. (Recipe posted in comments, below.) With a steaming cup of coffee – Happy Sunny Sunday!

Big, BIG ol’ salad for dinner tonight, so much good stuff, oooooh… With a bit of spicy beef left (yes, even after several burritos each, Nathan and I still have not quite polished it off!) plus tomatoes, corn, cukes, greens, and onions from my CSA veggie share, I think I’ll make a taco-ish sort of salad. Perhaps garnished with a few crispy potatoes instead of tortilla chips… Yeah, that’s the plan. NICE!

Lovely party hosted by Suzanne and Mike Burnett today, a going-away soiree for Kris and Tyler Nelson, and their sons Nick and Andy. Nathan and Nick have played baseball together for years, with their dads coaching together. They’re not moving far, still within the Twin Cities, but it’s far enough for new schools, new baseball team… Everyone is sad to see them go… Best wishes to the Nelsons!