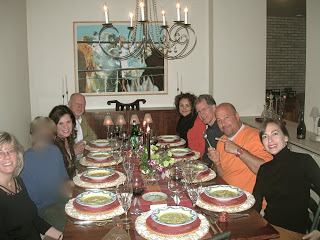 Ahhh,Happy Mother’s Day! I hope you’re all enjoying a lovely day! I sure am – John’s doing the dishes from last night’s dinner party – now that’s a gift. (As you can see in the pic, we put a fair amount of tableware through its paces.)

So, last night’s dinner menu (recipes posted in comments, below). I leaned pretty heavily on one of my favorite cookbooks, Sunday Suppers at Lucques by Suzanne Goin. The book is broken down into seasonal menus, eight/season – I didn’t follow any one menu to the letter, but pulled favorite little gems from here and there, all spring-y, all tasty. Stu and Rudy brought fabulous wines to taste and share, also listed below.

Despite being pretty wiped out from his birthday party the night before, Nathan was able to join us for (most of) dinner (he’s a 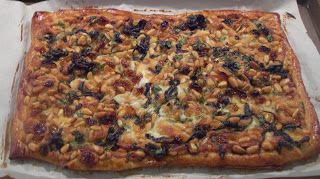 BIG fan of Bizarre Foods). Man, it was great to finally pull this party together, I’m kinda bummed that it’s over. We’ve had good intentions, but getting Zim and Rudy in the same room, in the same city, at the same time, is a bit of a challenge – how crazy we pulled it off twice in one week! I particularly had a blast cooking all day, I don’t get to do that very often these busy days. The only thing that could have made the day better was a lot less rain, and just a bit of warmth, for appetizers on the deck. But whatevs, we have all summer for outside fun (listen to me, so nonchalant about summer, ha), and having everyone in the kitchen with me while I cook is pretty damn sweet. 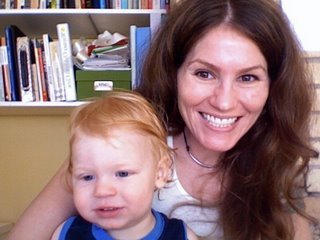 Today, leftovers baby! Already had some soup for lunch, nice. Perhaps a bite of a lamb chop in a bit. Dinner tonight a laLucia’s, with Mom and Stacey, to celebrate Mother’s Day (natch) and Stacey’s Birthday – Happy Belated Birthday Stacey Pooh (here with Cooper; I know she’s having a Happy Mother’s Day, ha.)

Moderate it: Stace, you may feel older, but you’re never as old as me. After party – enjoy the party leftovers! It’s too much work for just one meal – just be ready to pare back to normal. Er, tomorrow.