Happily had ribs, cabbage salad, and cherry tart for lunch. Inside this time, however; chillin’ on the deck isn’t nearly as much fun when there’s a chill – and rain – in the air. April weather, such a tease, hot one day, cold the next. Bitch. Just kidding. It’s not even cold today, it’s just not warm enough to eat comfortably outside. And I’m complaining. Who’s the bitch? 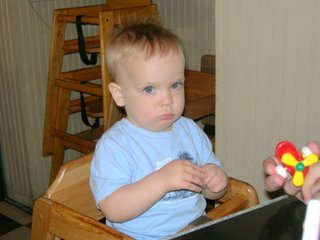 Nathan and I are planning on an early dinner with Rishia and Noah Zimmern, burgers at the Convention Grill, mmmm… Think I’ll have to go for the fried onions, think it’s a must do…

Oh god, I did the grilled onions, on my burger, with a hot fudge malt, and fries. Urgh. Not moderate, Stephanie. Uh, I’m a tad on the full side. Good eats, though, and great to see Rishia and Noah and Andrew, who was able to come along too. Andrew was saving his appetite, however, for leftover gefilte fish and chopped liver from the Seder he and Rishia hosted last night. You gotta love a guy who will pass on a burger for chopped liver and gefilte fish! Mmmmm, chopped liver. Haven’t sampled gefilte fish, I have to say. Someday, I’m sure. I forgot to ask if they had leftover matzo balls – those are my hands down fav. Cold, right out of the fridge. I should have been born a Jew; instead, I married one. John, who would rather eat dirt than chopped liver, gefilte fish, or matzo balls. Oy.

Nathan killed two birds with one stone by dipping smoking-hot fries into his malt – cooled the fries and melted the malt, just the way he likes both. Noah Blue Eyes decided rootbeer is yummy and was not pleased to be allowed only a couple of sips (how adorable is the pout, above? Fabulous…). He ate half of his mommy’s burger and sucked the salt and ketchup off several fries – he knows the best parts, ha.

Back here in plenty of time to catch the setting sun from out on the patio and enjoy this 84-degree – I repeat, 84-degree – evening. What am I doing? I’m going outside! ‘Night!