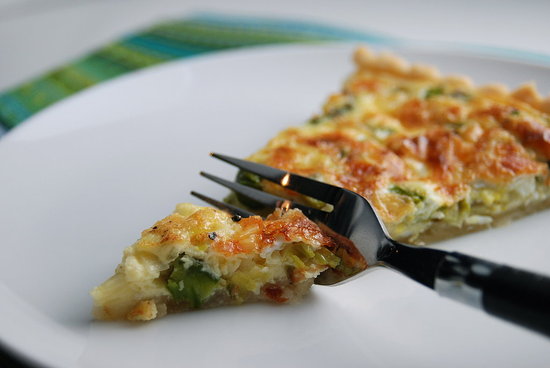 Here’s usually why I make quiche – I have no dinner plan, so I start a mildly panicked foraging in my refrigerator – a refrigerator that rarely lets me down, thank goodness – and discover a treasure of forgotten vegetables. Yes! If I score a half-eaten block of cheese in addition, I’m so jamming. And if I’m really jazzed, I make a patee brisee shell (not difficult, but sometimes I don’t have time to let it chill before rolling it out). If I’m not, and I’m just rushed, I pull a whole-wheat crust from my freezer, courtesy of Whole Foods (it’s surprisingly tasty), and fill ‘er up. 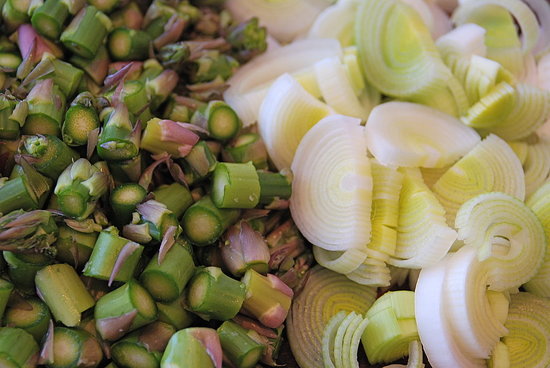 But not tonight, this time I planned for quiche. Craving a little taste of spring, but needing to make something that could sit for awhile until John gets home from a trip, I decided an asparagus & leek quiche would be perfect. 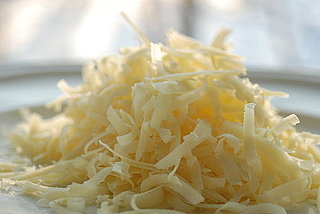 And it was. Buttery and crisp, lightly cheesy, pleasantly full of tender asparagus and leeks.

It’s a terrific recipe – a Martha Stewart classic. It’s so terrific, in fact, that I mess wildly with it, following the same basic egg, cream, cheese, and vegetable ratios, and cooking techniques, but innovating with my own vegetable and cheese combinations.

Broccoli and cheddar is a favorite. So is cauliflower and Swiss. Bacon and gruyere make for a lovely quiche Lorraine – I add mushrooms because I love mushrooms and bacon together. If you don’t, that’s cool, go with what you like. Although I should say that tomatoes and Parmesan are amazing together, especially with a handful of thinly sliced ham thrown in. But whatever, make it your own, Martha won’t care – meaty or meatless, cheesy or cheeseless, they’re all delicious. 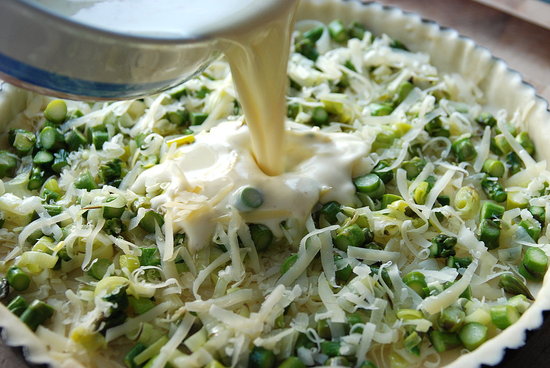 A note about the the crust – I prefer Julia Child’s patee brisee. It’s rich and buttery, flaky and tender, and just about the best thing you’ve ever tasted. Even if you don’t make it every time, make it at least once. Trust me – it’s first-kiss good. Bake it in a pie plate, or in a tart pan for something thinner and crispier. Change is the spice of life, even with quiche.

Oh my goodness, I just realized this is yet another post about eggs. Eggsellent should be the name of this blog, not Fresh Tart. What can I say? We eat a lot of eggs. I’d like to say that it makes me clever and sort of French, but it really just makes me lazy.

In a large bowl, whisk together eggs, half-and-half, 1/2 tsp. salt, a tsp. pepper, and a pinch of freshly ground nutmeg. Place pie crust on a rimmed baking sheet. Sprinkle crust with half the cheese, top with asparagus mixture, then top with rest of cheese. Pour egg mixture on top.

Bake until center of quiche is just set, 50-60 minutes, rotating sheet halfway through. Let stand 15 minutes before serving. (To store, let cool, then refrigerate, up to 1 day. Reheat at 350 degrees until warm in center, about 30 minutes.)

Measure the dry ingredients into the bowl of a food processor (equipped with the steel blade).  Add butter and shortening to the flour. Flick the machine on and off 4-5 times, then add the iced water, all at once. Immediately flick the machine on and off several times, and the dough should begin to mass on the blade. If not, dribble in a little more water and repeat, repeating again if necessary. Dough is done when it has begun to mass; do not over mix it. Gather the dough into a fairly smooth round ball. Wrap in plastic wrap and either freeze for 1 hour or refrigerate for 2 hours or overnight.

Because of its high butter content, roll out the dough as quickly as possible, so that it will not soften and become difficult to handle.

Place the dough on a lightly floured board or marble. If the dough is hard, beat it with the rolling pin to soften it. Then knead it briefly into a fairly flat circle. It should be just malleable enough to roll out without cracking.