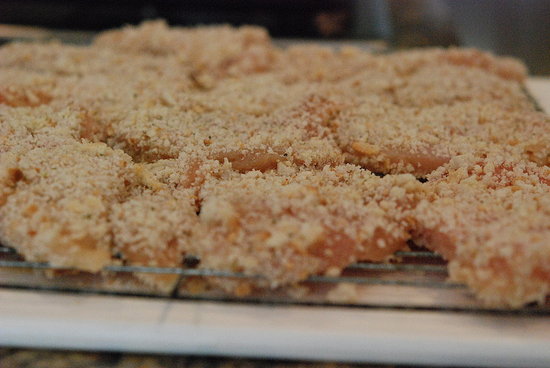 And an almost-post about it. I bit off a bit more than I could chew this afternoon and attempted a multi-step dinner when I knew that I had to be out out the door by 4:45 pm (basketball practice, church run). I usually keep Wednesday night dinners extremely simple (due to basketball practice, church run), but I had crispy chicken breasts on the brain, thanks to both a NYTimes feature on rethinking chicken breasts, and the delicious-sounding Sunday Supper at Lucques chicken paillards with Parmesan breadcrumbs, escarole, capers, and rosemary I was going to make on Monday (but didn’t). And while my kids aren’t (yet!) interested in escarole, capers, and rosemary (a dish intended for just John and me), they do love a spicy tomato sauce, so I set aside good sense and started pounding chicken breasts anyhow around 3:30 pm. 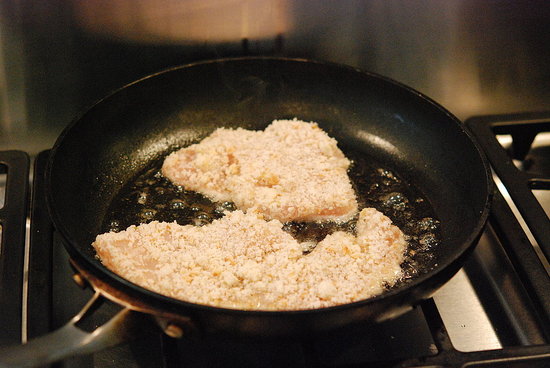 Actually, chicken parmigiana – at least the way I make it – is not at all tricky. It took me 10 minutes from start to finish to pound the breasts into cutlets. It took me another 15 minutes (or less) to quickly beat an egg with a little milk, make fresh bread crumbs tossed with Parmesan (Cuisinart), and pass the chicken breasts through both. I laid out the breaded cutlets on a baking rack over a baking sheet as I went along, allowing them to dry a bit. 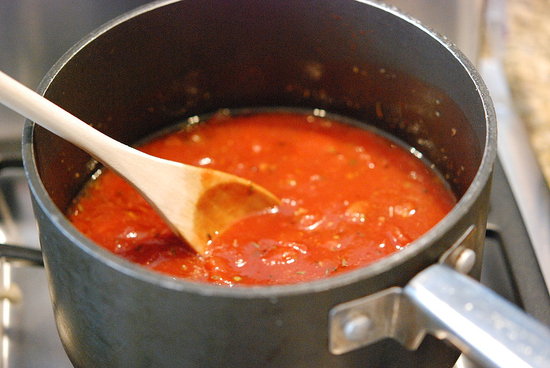 As I sauteed the breasts in batches, I also made a simple tomato sauce (canned chunky tomato sauce, garlic, olive oil, herbs, splash of wine) and sliced some mozzarella cheese (I happened to have a lovely whole-milk version in the fridge, but part-skim shredded works just fine). I spooned some of the sauce into the bottom of a baking pan, topped the sauce with a layer of sauteed chicken breasts, topped the chicken breasts with a bit more sauce, then topped the sauce with a few slices of cheese.

While the chicken breasts baked at 350 degrees (until the cheese melted, about 15 minutes), I started to make linguine – I’d say that I tossed the linguine with the rest of the tomato sauce, a little pasta cooking water, a healthy grating of Parmesan cheese, and several grinds of black pepper, but I was gone by that point, so John did it.

Yep, I ran out of time, somewhere between sliding the chicken into the oven and stirring the pasta into boiling water. 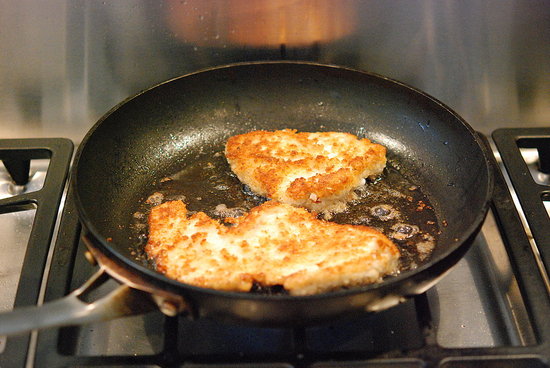 I took exactly zero pictures after 4:30 pm, which is about when I realized there was no way in hell I was going to complete dinner by 4:45 pm. Therefore the pics of breaded cutlets, and merrily sauteeing cutlets, but none of actual chicken parmigiana…

I did manage to slice a chicken breast into strips, and quickly pack the strips with some tomato sauce for dipping, for my son to scarf down in the car between school and church. Not ideal, but it worked. I ate my dinner, reheated from ice-cold (tasty but completely unphotogenic), between church drop-off and pick-up. (And made a mental note to stick to the un-pounded, un-breaded basics on Wednesdays from now on…)

And oh, PS, Thursday morning now: I got so cranky about goofing up my timing that I forgot to say that it’s completely worth making chicken parmigiana on a less busy day, because it’s delicious and kids love it, but also because if you make it at home it doesn’t have to be the calorie bomb it tends to be in restaurants. To keep the breading on the lighter side, I use fresh bread crumbs or panko crumbs – both are fluffy, stick to the breasts in spots, and therefore don’t create a heavy, thick coating. Saute the breasts in oil meant for high heat (peanut oil or refined safflower oil, for instance) and the keep the heat at medium high so the breasts brown quickly (and soak up less oil). And use a light hand with the cheese – no need to bury the chicken, a smaller amount tastes fabulous and doesn’t drown out the fresh tomato sauce and ruin the crisp crust you just worked so hard to create!