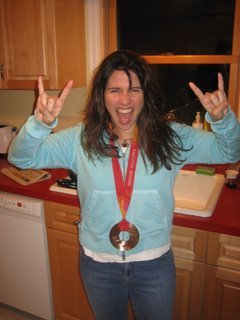 Check out Suz, the bronze medalist (or should I say metalist?), from yet another pic that I stole off her blog. Since, as often as I write about Suz, I would have mentioned that she were an Olympic athlete, you’ve probably already guessed this isn’t her medal. It actually belongs to her friend Trish, hard-won for her role on the USA Women’s Hockey Team in their recent Torino appearance. So cool! We should just make this picture the banner for Feminine Hijinx, forget about Kim and me! This pretty much sums us up. Dorkin’ out, little bawdy, and lots of fun. I’m thinking I’m up for a recording session tonight – I have a voice (so far today), coughing has lessened considerably, got some sleep last night. Yeah baby, I’m ready to go!

Today I have some major menu-planning to set my mind to. My stepdaughter A’s Bat Mitvah is coming up at the beginning of April, and we’re hosting a cocktail party/reception afterward (while she’s at her big dance party) for about 60 friends and family. I’ve decided I’m going to prepare the food myself, which is probably insane, but that’s the plan. I do love to throw parties, and we’ll keep this relatively simple since it’s an after-dinner affair, so it really will be more fun than chore. The biggest chore-factor will come from getting the house ready, sigh, I’ve got several unfinished projects around here. Several. Well, that’s what entertaining is for, right? To get together with family and friends? Hell no! To get the house cleaned and fixed up! If not for the pressure of a few parties per year, I’d get nowhere. Seriously lame, but true.