Notice: The called constructor method for WP_Widget in Fresh_Tart_Archive_List is deprecated since version 4.3.0! Use instead. in /home/fi8vhu4or46a/public_html/wp-includes/functions.php on line 3947
 Muffuletta Sandwich: Make-Ahead Sandwich Perfection | Fresh Tart by Stephanie Meyer |
Menu ≡ 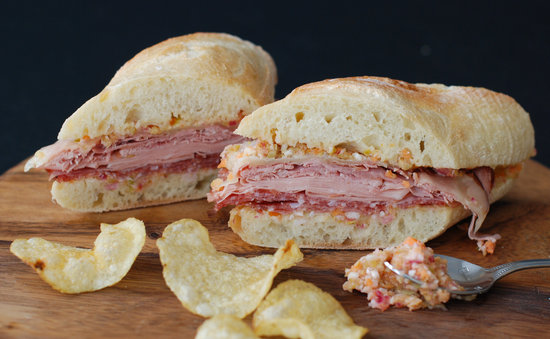 Make-ahead sandwiches are a terrific way to feed a crowd and muffuletta sandwiches are the best way of all. First of all, the fresh-spicy giardiniera relish is ridiculously addictive – in fact, make a double batch, put half the vegetables in a jar to enjoy on as pickles, puree the other half to smear on the sandwiches. And what meat eater doesn’t love a pile of salami, ham, AND mortadella smothered in melty provolone cheese? (Even if you don’t eat meat, a grilled cheese with giardineira relish is a mighty fine thing…perhaps add a fried egg…you know the drill.)

The trick is to choose crusty bread that isn’t impossible to bite through. The traditional New Orleans-style muffuletta bread isn’t easy to lay your hands on here in the Midwest, but choose your favorite fresh, hearty bread or rolls and your sandwich will be fantastic. This baby actually improves with sitting for a bit – the relish really soaks into the bread, mmm – so absolutely make sandwiches a day ahead, wrap them in foil, then heat them to eat them the next day or even two days later. 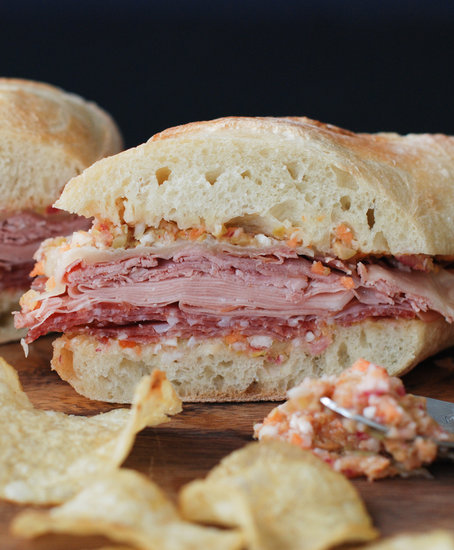 Wash down the loveliness with this recommendation from my beer-fiend friend Mark Dewes: Choose a rich, malty brew to stand up to all that glorious meat, cheese, and relish, such as local craft brew Boom Island Belgian Dubbel, or NOLA’s Abita Mardi Gras Boch. Cheers!

Note: The giardiniera is fantastic after two days, but awfully delicious after even just an hour or two. Sandwiches can be made ahead; wrap in foil and chill. Heat sandwiches, in foil, for 10-15 minutes in a 350-degree oven.

Spread each half of bread with giardiniera. Layer with capicola, then mortadella, then salami, then provolone. For a hot muffuletta, place closed sandwich in a 350-degree oven for about 5 minutes. Let sit if possible, to allow the juices from the giardiniera to soak into the bread, then serve whole, cut in half, or in four triangle-shaped pieces.

*Or substitute another hearty Italian bread.

Place vegetables in a 1-gallon container. Pour liquid over vegetables and let sit for two days before using. Strain and discard liquid. Puree vegetables to a spreadable paste.