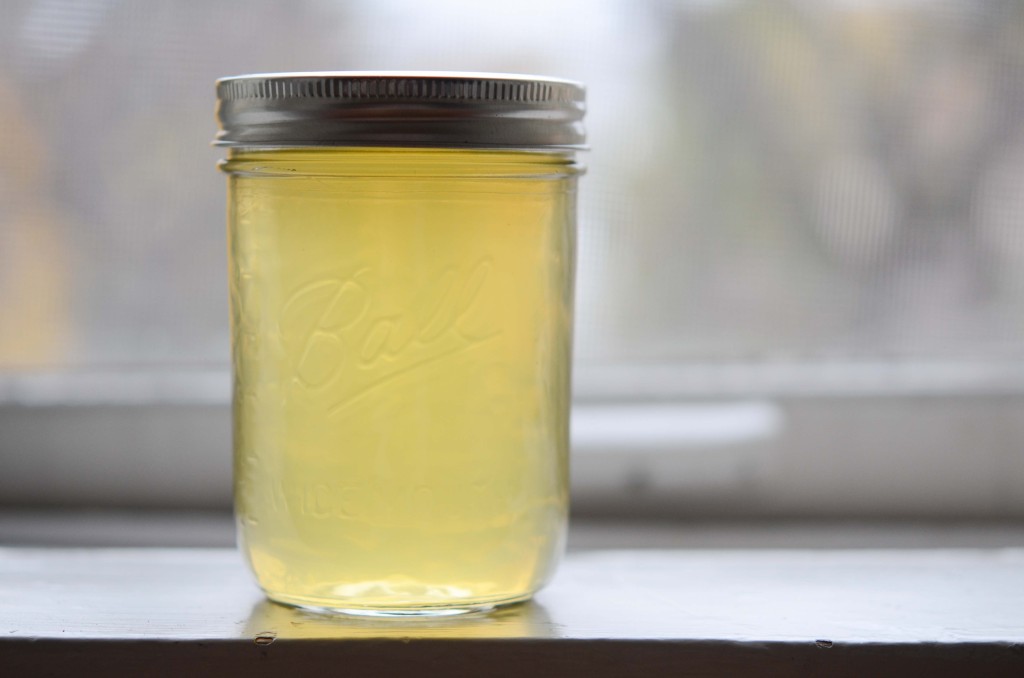 Here, in this jar, is the pure gold otherwise known as chicken broth. Utterly delicious yes, but equally as important – soothing. Healing. Not just to my soul, but to my sometimes bitchy digestive system. When I accidentally eat gluten, or hit a non-gluten grain too hard, I had might as well pull out my maternity clothes because seriously, I look l like a full-term Nathan 2.0 is about to arrive. I hate when it happens, and I try mightily to prevent it, but…so it goes in the world of food. The remedy? A mug full of hot chicken broth, made from fresh chicken. Ahhhhhhh, heaven.

It’s gotten to the point that I feel a bit anxious when I’m running low. I keep several containers in my freezer, ready to sip on its own (a perfect snack), or to turn into the best fast soups on the planet (more on that later this week). Chicken broth in a box is so ineffectively limp in comparison, and the real deal is so ding dang easy to make and freeze, that it just doesn’t make sense to be without it. 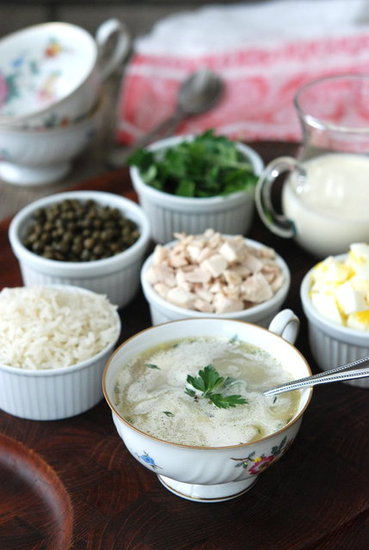 I can’t post about a good, rich chicken broth without reminding you of this cozy M.F.K. Fisher recipe for A Chicken Soup Supper, one of my very favorite dishes.

This is more of a process than a recipe:

First and foremost, buy seriously good chicken. This elixir is only as healthy and healing as the ingredients you put into it, so spring for a farmers market or co-op chicken, a free-range, hormone-free, locally raised gem (’round these parts, Kadejan, Callister, etc.). Sometimes I buy a whole chicken, sometimes I buy a combo of wings, thighs, and legs, often I buy a big ol’ bag of wings, around 3-5 pounds.

Get ready to release some aggression. Set out a large stockpot (or crock pot; notes below). Grab a cleaver, and a large cutting board. Lay the chicken pieces (or whole bird) on the cutting board and start hacking with your cleaver. Like, stand back, make sure no human body parts are anywhere near, and thwack! Hack into the bones in several places, perhaps even through the bones. Toss the hacked pieces into the stock pot as you go.

If you have bones from roasted chicken (or turkey or steak or lamb chop or pork shoulder) dinners stashed in your freezer – and of course, you should – add those too (still frozen is fine). If I don’t have other bones, I often toss in a couple of frozen oxtail pieces because they’re cheap and contribute a marvelous amount of gelatin. When you’re done, add filtered water to cover the chicken pieces by 1 inch (but no more, or the broth will be too diluted and won’t gel). Add 1 teaspoon or so of dried thyme (optional) or several sprigs of fresh. Add a bay leaf or two. Add one small, quartered skin-on onion as well as three cloves of smashed skin-on garlic. Add 1 teaspoon of sea salt.

Set the stock pot over medium-low heat. Bring to a slow, slow simmer, NOT a boil. Do not cover. It will take awhile to come to a simmer, which is great, because you can wash a few dishes, sweep the floor, sip a cup of tea, do some work, or watch a movie while you wait. Check the broth every once in a while. When it’s slowly simmering, turn the heat to low, and let the broth barely simmer for up to 3 hours, skimming occasionally without stirring.

Remove from heat and set aside until cool enough to handle. Line a colander with several layers of cheese cloth and strain warm broth into a large bowl. Discard chicken, bones, and vegetables. I taste for salt and add a bit more at this point, but you can leave it as is and adjust seasoning as you cook with it – your call. Cool broth to room temperature and transfer to storage container(s). I usually transfer to 4 containers, make soup with one, and freeze the other three. Fat will rise to the top, which you can leave in place (for richer broth), or remove when solid and chilled. Up to you. A note: I store – and yes freeze – my broth in glass jars. The trick is to 1) leave a solid half-inch of head space for the broth to expand as it freezes, and 2) to cool COMPLETELY before putting in the freezer (or you will crack your jars).

If you use a crock pot, follow the directions above except add all the ingredients to a large slow cooker and set on low. I like to set it up before I go to bed and let it simmer overnight, for up to 10 hours. I cool and strain the broth in the morning. Crock pot chicken broth is lovely, nice and clear, because it never boils.

If you use a pressure cooker – an Instant Pot works very nicely – use a bit less liquid to accommodate for cooking covered (less evaporation). I fill to one inch below the top of the chicken pieces. Pressure cook for 45 minutes. When done, turn Instant Pot off and let rest for 30 minutes. Release pressure and strain and store per above.