Let’s call it summer and make plans to eat outside, preferably as often as possible. Dinner al fresco pretty much anywhere feels special, but dinner on a farm is particularly divine for us city dwellers, away from cubicles and concrete, with time to learn about, discuss, and savor food prepared at its source.

In fact, one of the best meals I enjoyed in all of 2011 was an Outstanding in the Field (OITF) dinner, at Riverbend Farm near Delano. I realize that a setting so gorgeous can work strange magic (farm goggles?), but I’m quite sure that aside from the view, the bounty of family-style platters, piled with fresh salads, cheeses, and wood-fire grilled meats, would blow my mind in the dingiest of rooms. When the night ended with chanterelle mushroom ice cream – a dish at once delicious, clever, and just plain fun – I knew I’d had an unforgettable meal.

If you missed last year’s event, no worries: OITF is circling back to the Twin Cities on August 9, this time landing at picturesque Little Foot Farm near Afton. Given OITF’s stated mission to “re-connect diners to the land and origins of their food and to honor the local farmers and food artisans who cultivate it,” there will most certainly be discussion about how Little Foot owners Karen Weiss and Sally Doherty found their calling, especially given they were inspired to raise hogs in general and Berkshires in particular after being served “awesome” Berkshire pork by chef Lenny Russo at a 2005 OITF event.

I tagged along with Phillips and chef Scott Pampuch – the two are this year’s OITF host chefs – as they scouted the farm for the event and chatted with Weiss about Little Foot’s sustainable philosophy and their careful practices for humanely raising and selling best-quality, highly-prized pork (as well as chickens, eggs, produce, and bedding plants).

As we talked, there might also have been a fair amount of piglet cooing going on, even by the charcuterie boys (the pic up top might be one of my favorites, ever). Oh my goodness the Gloucestershire Old Spot piglets are adorable with their snuggly snorting and flirty sly smiles. We were smitten!

You’d think it might have been tricky to move from petting pigs to planning the menu but alas, it was a seamless progression. Both Phillips and Pampuch are known for their pork mastery, so it goes without saying that the meal – which will also include piles of gorgeously prepared vegetables – will be at its essence utterly porktastic. The charcuterie was begun the very next day, in fact, with the butchering of two hogs.

Picture a dinner table set with a colorful variety of snappy, custom-made condiments to sample with each course, including the spicy-tangy-sweet Rhubarb Mostarda pictured below. Serve the mostarda as a foil for rich pork belly, pork terrine, or pork rillettes.

See you on the farm! 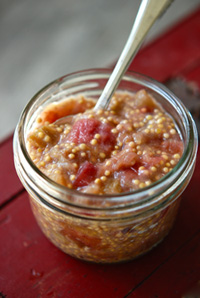 Note: Begin the mostarda the night before you plan to serve it.

The next day, preheat oven to 350 degrees F. Line a baking sheet with parchment paper.

Drain mustard seeds and set aside.

In a large bowl, toss rhubarb and sugar together, then spread onto prepared baking sheet. Bake for 25 minutes or until sugar has melted and rhubarb is tender.

In another large bowl, whisk together dry mustard and water. Stir in the rhubarb, then the mustard seeds. Cool to room temperature and serve, or cover and chill. Can be kept refrigerated for up to two weeks.