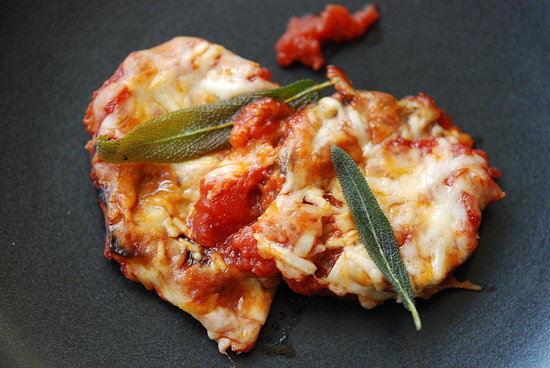 This post was supposed to be about the lovely-sounding spinach custard that I made the other day…except that it failed miserably. I had a feeling, as I put it in a 400-degree oven (as directed), that bad things were about to happen. Custard and high heat usually mean a weeping, watery mess…

It smelled divine. It was gorgeously green as I cut into it. And it was as wet as if I’d dumped water on it – or coffee, because that was the color of its tears, or my tears, who cares. I ate a few bites and sadly threw the mess away.

So onward and upward and back to good ol’…eggplants! Darling eggplants, the stars of summer 2010, as it’s turning out.

I’ve been crazily buying eggplants at the farmers’ market these last few weeks. Fresh eggplants are so tender and sweet, they pretty much blow away their grocery store counterparts (you know what I mean – dry and loaded with bitter seeds). If you see them at the market, grab them while you still can. 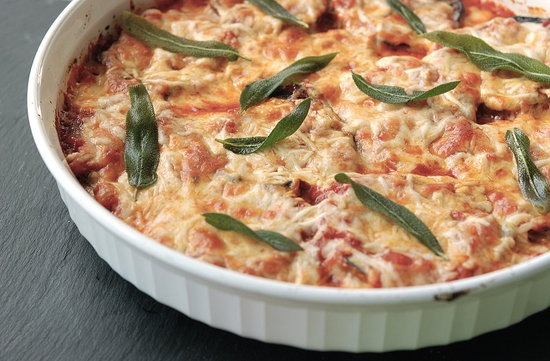 You already know how much I love Eggplant Caviar, a staple in this house. And simply grilled eggplant slices are perfectly delicious (brush slices with oil, sprinkle with salt, grill until tender, finish with fresh herbs and a squeeze of lemon juice). But if cooler evenings have you in the mood for something a bit more substantial (clearly I am in this camp), check out this Ratatouille with a Poached Egg.

Or this version of Grilled Eggplant Parmesan.

A note of explanation: Traditional eggplant Parmesan is one of the most caloric dishes on the planet. It’s not the eggplant that’s fattening – eggplant itself has very few calories. It’s the fact that eggplant is an oil-sucking sponge that makes it such a calorie bomb. It helps enormously to salt and drain the eggplant first, eliminating some of its absorbency, but even still, you’d be amazed at how fast a few slices can drain a saute pan of oil. Add breading, and cheese, and just watch…there it goes, jumping out of the casserole and onto the outside of one’s thighs, quick as one can say, “Butt wait!” 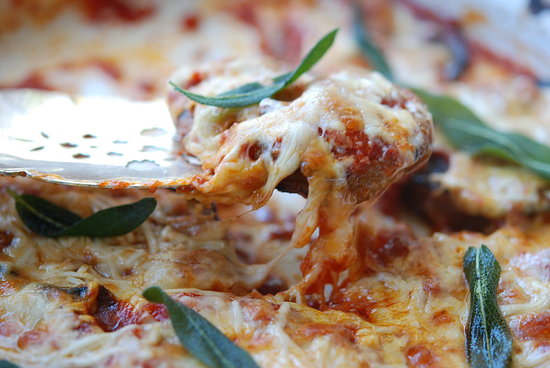 Unless you grill the eggplant instead of frying it! Grilled eggplant needs only a brush of oil and turns out just as deliciously as the fried version (see above). And anyhow – the greatness of eggplant Parmesan is not in the frying of the eggplant, it’s in the melting of (a modest amount of) cheese over tomato sauce, banishing all thoughts of that weeping green custard. Right?

See if you agree.

Preheat grill. Spread out 2 3-sheet sections of paper towels on the counter, layered on top of each other. Lay eggplant slices on paper towels and sprinkle both sides of the eggplant lightly with salt. Let sit for 30-60 minutes.

Meanwhile, set a a large saucepan over medium heat. Add olive oil, then garlic, and saute until softened, about 2 minutes. Add dried oregano and saute until fragrant, about 1 minute. Using your hands, crush tomatoes one at a time into the garlic. When all of the tomatoes are crushed, add the remaining tomato sauce from the can as well. Add 1 tsp. of salt, a few grinds of black pepper, then turn the heat down and simmer the sauce over low heat for 10 minutes, stirring a few times. Remove from heat and set aside.

In a small skillet, heat the remaining 2 Tbsp. of olive oil over medium heat. When the oil is hot, add the sage leaves in an even layer. Fry for about 30 seconds per side, turning with tongs, until lightly crisp. Drain on a paper towel, reserving oil.

Lay another two layers of paper towels over the eggplant and press firmly to absorb the eggplant liquid. Using the fried-sage oil, brush both sides of each eggplant slice with the oil, laying slices on a plate as you. Grill the olive oil slices for 3-4 minutes per side, or until lightly browned and tender.

To assemble the dish, spoon about 1 c. of tomato sauce into the bottom of a 10-inch tart pan (enough to cover the bottom). Lay one layer eggplant slices in the sauce. Top slices with a bit more sauce, then sprinkle half of the cheeses over the eggplant. Distribute the sage leaves over the cheese. Repeat with the remaining eggplant, more sauce, and the remaining cheese. Bake for 30 minutes, or until cheese is bubbly and browning a bit in spots. Let rest for 10 minutes. Serve hot.