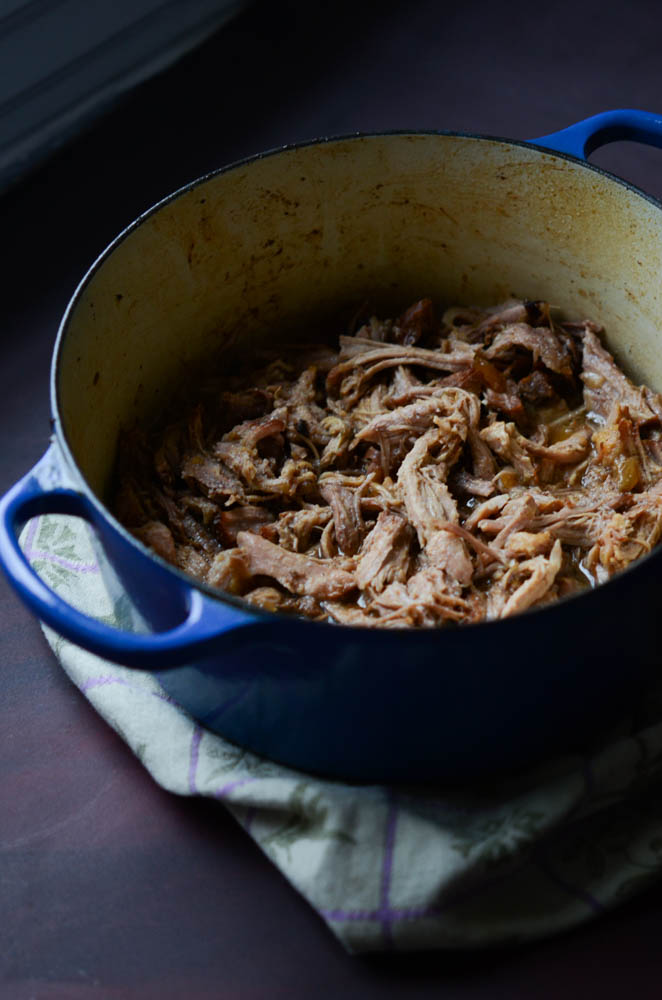 Happy Monday! As I chat with people about the obstacles of adopting a real food lifestyle, I’ve come to realize that one of the biggest is the fear of standing out and/or annoying people.

Which is totally legitimate, I’ve had those same concerns. It’s comforting and useful to be a peacekeeper. But conformity has its limitations, especially when it comes to health, and so I suggest that if you’re thinking about making a lifestyle change: embrace your inner rebel. It’s fun to stir the pot a bit, and more important, it’s necessary if “live big” is on your agenda. It’s definitely on mine.

By the way, I do realize that I’m hysterically late to this rebellion game – in effect, I’m a 48-year old teenager. In so many ways, I am the very definition of a late bloomer but hey, better late than never.

I am so grateful to the rebels on the internet – back in 2010 – for providing the first articles suggesting the link between gluten and autoimmune disease. I’m not sure I would have come up with it on my own, despite all of the food tracking I was doing. I am so grateful that my skeptical then-doctor did not mock me when I said I was going to quit eating gluten but offered: I doubt it will help, but there’s no harm in trying, gluten isn’t a nutrient and bread is mostly empty calories. (PS My most recent blood work confirms that I am in remission. So for the record, it worked.) I’m so grateful for the iconoclasts who pointed out that processed food and sugar are not just devoid of nutrients but harmful, that human health is dependent on real food, that industrial agriculture is bad for the earth and for our health, that the rise in autoimmune and chronic disease is no accident. I’m so grateful for the researchers and scientists who despite limited funding – because they’re not researching drugs – find ways to conduct and publish the research anyhow and are connecting the dots between nutrition and gut health, autoimmune disease, chronic disease, fertility, epigenetics, mental health, intelligence, hormone balance, and on and on. Slowly. But authentically. It’s happening. 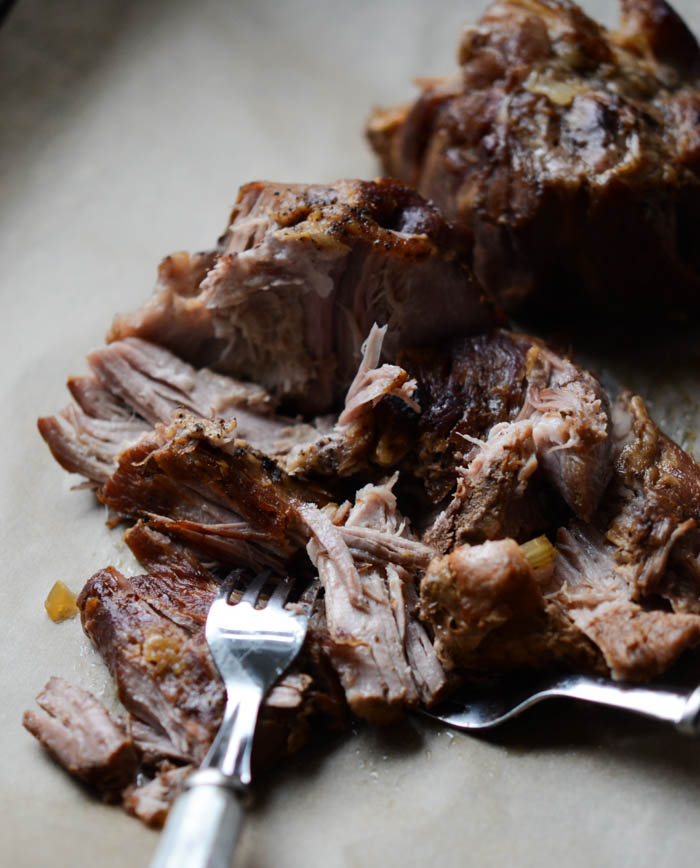 And so, until the time when that cultural shift happens, and living a real food lifestyle is (once again) the status quo, embrace your inner rebel.

On the down side, prepare to be mocked, chastised, lectured, and shamed. Be aware that some people take it very personally when you decide to improve your diet, especially if you’re self-experimenting and/or working ahead of the mainstream curve. Quietly and graciously do it anyhow. On the up side, prepare to hone your skills in diplomacy, self-assurance, following your gut and heart (puns intended), and kindly not giving a f*ck what other people think. I’ve found that meditation has been a helpful practice to adopt alongside a real food lifestyle because it gives me the ability to manage stress as well as pause and reflect before responding. Sometimes. But seriously, along with the better energy and clarity of mind that come from deep nutrition, I think I’m doing an okay job of shedding my keep-the-peace ways while also maintaining my tact.

“There’s a rebel lying deep in my soul.” – Clint Eastwood

If you’re considering the autoimmune protocol (AIP) elimination diet but are overwhelmed by the idea, consider Autoimmune Paleo’s 6 Weeks to AIP program. It includes shopping lists, menus, recipes, tips, how-tos, coaching, and a supportive community. You can’t beat it. (Talk with your physician before you begin, particularly if you take medications.) Both co-authors of the blog – Angie Alt and Mickey Trescott – are deeply knowledgable AND have published gorgeous AIP cookbooks (plus the blog itself is loaded with delicious ideas as well). And as always, The Paleo Mom has written the definitive book describing the science behind and specifics of AIP.

If you don’t have autoimmune disease but are feeling chubby and brain-fogged, you’ll enjoy Dave Asprey’s podcast The Bulletproof Executive and the book The Bulletproof Diet (which I also referred to last week). I am a convert to Bulletproof coffee (I’ve reintroduced coffee since following AIP; you can make it with tea also). I have one cup each morning (but no more than that), made with MCT oil, ghee (also reintroduced), and collagen, and it has boosted my energy significantly. (And I’ve dropped a few pounds in the process. Yay for eating fat to lose fat, YES.) I’ll write more about it later, but for now check out his site for an overview of the concept. 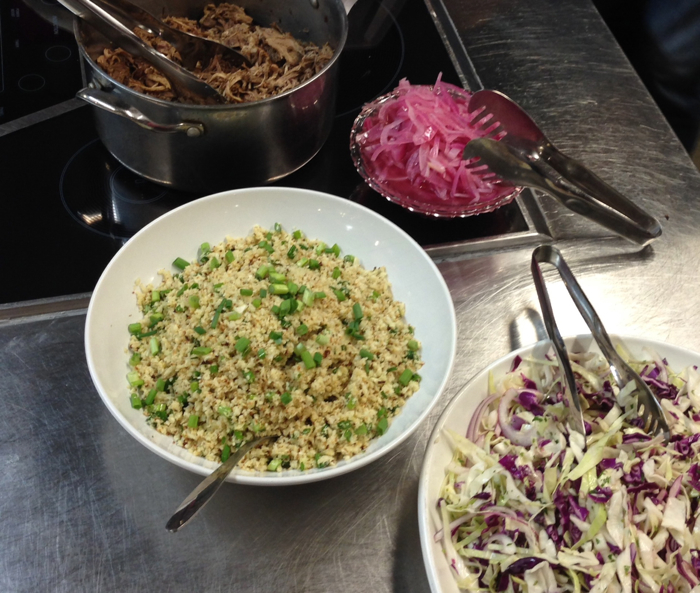 And here are TWO more recipes from the Paleo Sunday Suppers class I taught at Kitchen in the Market. We devoured the pork in plantain tortillas, alongside the roasted cauliflower rice (pork and cauliflower recipes below). I brought my InstantPot pressure cooker so we could have carnitas in an hour. If you don’t have a pressure cooker, braise the shoulder in a covered Dutch oven, in a 240-degree oven, for 3-4 hours or until tender.

Note: Instructions below are for serving in pan juices. For crispy carnitas, after pulling meat apart, spread on a baking sheet. Spoon a bit of the pan juices over, just enough to moisten a bit, and run under a broiler for a few minutes until edges of pork are browned and crispy.

In a small bowl, combine salt, oregano, garlic powder, and onion powder. Sprinkle evenly over all sides of the pork and run in. (Can be done up to 24 hours ahead of cooking.)

Set the pressure cooker insert over medium-high heat (or use the saute setting on your Instant Pot if you have it; I don’t, my model is older). Add the bacon fat and when hot, brown the pork pieces on all sides until nicely browned. Add onion, garlic, ginger, and apple cider to the pan.

Pressure cook according to product instructions (I use the Instant Pot stew setting, which is 35 minutes, but I add 10 more minutes for a total of 45 minutes. When cooking is done, turn Instant Pot off and let rest for 30 minutes. Release pressure.)

Preheat oven to 400 degrees F. Arrange racks in the middle of the oven. Line 2 baking sheets with parchment paper.

Place cauliflower in the in the bowl of a food processor and drizzle with oil. If there’s too much cauliflower to fit, process in batches, dividing the oil among the batches. Process cauliflower until it’s the texture of small grains of rice or couscous. Add a pinch of salt and process briefly to combine. Divide cauliflower between baking sheets, spreading evenly. Roast for 20 minutes, then stir cauliflower. Roast for another 10 minutes, until cauliflower is browning at the edges and is tender, dry, and fluffy.

Scrape into a large serving bowl and add scallions and lime zest. Season with salt to taste. Serve warm or cool to room temperature.